By DAN MCCLENAGHAN
February 9, 2014
Sign in to view read count 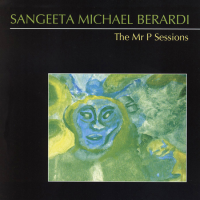 In October of 1996, guitarist Sangeeta Michael Berardi went into Nevessa Studio in Woodstock, New York, and laid down the tracks for what would become two monumental recordings, Earthship (Sunjump Records, 2008) and Calling Coltrane (Sunjump Records, 2011). This is stunning music from a man who played with Alice Coltrane, Roswell Rudd, Rashied Ali, Archie Shepp—a resume that correctly suggests a free approach to music. Call the seventeen tunes from that session the new Testament of John Coltrane, circa 1965 to 1967, the last chapter of the tenor titan's life, when the spiritual search flew free. The influence on Sangeeta Michael Berardi is strong, especially on the longer tracks: "Earthship," ""My Favorite Things," (the tune that Coltrane reconfigured, with the soprano sax) "Wise One"(that Coltrane wrote), "Calling Coltrane"; "Six for Rashied." Saxophonist James Finn is here, reaching for the stars. Pianist John Esposito pulls percussive chords out of the ether; and bassist Hillard Greene and drummer Peter O'Brien round out a rhythm section that lays the foundation for stratospheric sounds. And then there's Sangeeta, ("The Divine Song") soaring in from the far reaches of the solar system, making six electric strings sing like no one has before, or since, with a sound that is cosmic in scope, orchestral, deeply spiritual and mysterious and singularly, ass-kickingly virtuosic, something like Jimi Hendrix might have sounded had he gone deep into jazz and joined Coltrane's band in 1966.

Times, for the guitarist, have changed. Parkinson's disease, the degenerative disorder of the central nervous system has taken his ability to play guitar at the "cosmic fingers" level he once employed. It is a stroke of cosmic cruelty, but Sangeeta is undeterred in his musical/spiritual quest. He offers up now The Mr. P Sessions, an attempt to incorporate the tremor/shakes/vibrations of Parkinson's Disease into his artistry.

This is a gloriously sprawling, 2 CD hodgepodge of sound that opens with Sangeeta, his voice rendered raspy from the disease, singing unaccompanied, "I'll Sing My Way," a thumb of the nose at Parkinson's that leads into the anthem, "Mr. P." Sangeeta's voice opens it, Kendra Shank and vocalist/violinist Rosi Hertlein sing back ground, and about two minutes in the band rises like a Phoenix. Hertlein's violin wails; Shank's vocalese surges up out of the ashes; Mitch Kessler sings deep truths on bass clarinet; pianist John Esposito pounds out out holy chords, and drummer Peter O'Brien and bassist Hilliard Greene lay down a wall of rhythmic apocalypse. All this a prelude to Sangeeta Micheal Berardi, sounding like a mad Prophet, moaning in on a wordless, wavering, Parkinsonian sermon.

Then there's the bowls. "Solar Wind" features Berardi on an array of Japanese and Tibetan Singing Bowls. Teamed with the inspired drum work of O'Brien, Berardi explores a world of ringing vibrations on these instrument where his Parkinson's tremors are incorporated into the artistry, beautifully.

The eighteen-plus minute "Prayer for Peace" opens with what sounds like a Gregorian Chant, the sound waves slightly warped from a trip through a semi-permeable membrane. Seven minutes in, the band opens up with an insistent rhythm behind Kessler on soprano, Hertein's violin, and Shank and Berardi duet near the closing with wordless ululations.

CD 2 is more of a bits and pieces affair, mostly short tunes with the Singing Bowls again, and Berardi's wavering moans, Shank's angelic vocalizations, Sageeta Michael Berardi poems read by Mikhail Horowitz—including the hilarious and irreverent "Farts Are Holy"—maracas (probably Berardi's multiple medicine bottles used as amber plastic shakers), Interstellar Frequencies I and II, pulled in, it seems, from deep space, and a wrap-up of the nine minute-plus "Remembering Coltrane II," featuring Berardi's still-eloquent work on acoustic guitar beside John Esposito's searching piano, joined by violin, flute and subtle electronics in a gorgeous, meandering prayer to to the iconic saxophonist.

The Mr. P Sessions is a triumphant offering from Sangeeta Michael Berardi.

CD 1:I'll Sing My Way; Mr. P; Solar Wind; Prayer for Peace; Feelin' Down and Lonely; Mr. P. Meets Mr. POB; Remembering John Coltrane II. CD 2: We Give Thanks; Imagine; In the Light of the Inner Sun; Witnessing Another Day; Talking in Saxophone Tongues; Farts Are Holy; Interstelar Frequencies I; Inside My Head; Interstellar Frequencies II; Bought Him Like a Pet; Call of the Cosmos; Chicago Nights I; Mr. P and Baby James at Play; Chicago Nights II; Remembering John Coltrane II.