By SETON HAWKINS
January 5, 2019
Sign in to view read count
AAJ: When you listen to the two ensembles, you can hear a through line. Can you talk about how Ancient Agents came together, and how the album emerged?

RS: I was in Switzerland. I end up there a lot, at least twice a year. I was staying at Jan's place after A.Spell broke up. We're still great friends. While there, I woke up with a fully-formed idea in my head about the four people that would need to be involved, the name, and a distinct sound. That was Ancient Agents. I phoned the guys in a state of euphoria asking "Would you like to do this?"

They all said, "Sounds great, let's try it." Knowing that Fredrik Gille was from Stockholm, it was kind of crazy, and I was thinking how the hell is that going to work? So I thought, "What have I done? I've got to make this happen. I can't say things like that and not do anything about it. This is a great opportunity!" So I managed to sell this idea to Concerts SA, which is a funding program through SAMRO [South African Music Rights Organization] and the Norwegian Arts Council. They do the "Mobility Fund," where they'll give enough of a grant to hit the road and be able to organize a kind of a mini-tour. It was quite a weird thing, selling a concept that didn't exist to an arts council. We had no material. We had nothing. We didn't even have band photos. We also had to entice people to come and hear it, even though they hadn't ever seen or heard any of it. It was quite crazy.

I remember chatting with some people before the project took shape, who all said, "Man, you've got to have an album to sell. You can't just go out there and not have a product." I realized that's definitely what I didn't want to do. I've fallen into that trap before, scrambling too quickly and doing something just to have something to sell. After the tour, you realize that's when your band is supposed to record, because it sounds like a band by then. So I said, "Nah, we should hit the road and then record the album." There wasn't much more discussion around it. Ultimately, I'm very thankful for sticking to this approach, since once we recorded the sound and the band had developed, and the music and collective sound could be captured in the correct way. Anyway, I put that whole thing together, and Fredrik flew in from Sweden and met the guys. It was a total gamble: maybe they would have hated each other, or nothing would have worked.

Reza brought two tunes, Schalk brought two tunes, I brought a tune, and we collectively wrote two of the pieces together. It all happened very quickly. Then, over ten gigs through South Africa, we developed a sound and developed the personalities in the music with each other. I wanted to approach that recording at the end of the tour in a similar way to what we had done with the Deep South album in Switzerland, with everyone in one room and get an honest, real groovy sound. That's what it is. We did it in three days. In fact, we recorded probably three-quarters of the album in the first day, the rest of the tunes the second day, and mixed it on the third day. There are a couple of overdubs here and there, textures mostly. I play a shaker here and there on top of some things. Other than that, it's very honest and the way it is live. One of the key elements is that I wanted it to be a representation of what it sounds like live. 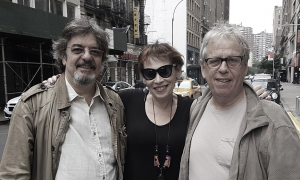