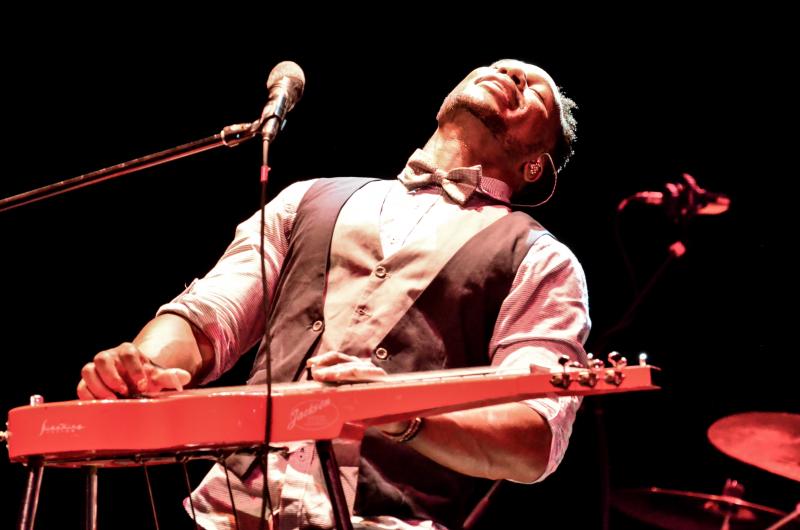 Robert Randolph and the Family Band is a New Jersey-based funk and soul outfit led by pedal steel guitarist Robert Randolph (who has sometimes been called the "Jimi Hendrix of the pedal steel guitar"). The majority of the Family Band is comprised of Randolph's blood—his cousins play drums, keyboards and bass and his sister Lenesha Randolph handles the background and occasional lead vocals. Guitarist Brett Haas is not a relative.

Robert Randolph started playing the pedal steel guitar in church in his hometown of Newark, NJ. As a regular attendee at the House of God Church, Randolph learned to play by watching other steel players during church services. Eventually he set forth and updated his religious-based gospel-influenced sound with a mix of funk, rock, soul, pop, jazz and even a touch of country.

In 2000, Randolph was discovered by Jim Markel and Gary Waldman who began managing the guitarist. Matt Hickey, the booker for the Bowery Ballroom in New York City, soon signed Randolph to open for the North Mississippi Allstars. In short time, Randolph was playing with Medeski, Martin & Wood at the fabled Beacon Theater. Eventually Randolph recorded a an instrumental gospel/blues album with that band. The resulting album, The Word (Rope A Dope Records, 2001) received critical and popular acclaim.

Soon after, Randolph got together with his relatives to form the Family Band. The first Robert Randolph and the Family Band album, Live at the Wetlands, was released in 2002 on Family Band Records. In 2003, the group released its first studio album, Unclassified (Warner Brothers Records). Colorblind (Warner Brothers Records, 2006) followed and featured Eric Clapton playing guitar on "Jesus Is Just Alright." The band's third Warner Brothers Records studio recording We Walk This Road was released in 2010. Blue Note Records released Lickety Split in 2013. In early 2017, Got Soul was released by Sony Masterworks. In addition to Clapton, Trombone Shorty; Dave Matthews; Ben Harper; T-Bone Burnett; Leon Russell; Doyle Bramhall II; Jay Bellerose; Jim Keltner; Carlos Santana and many others have appeared on Robert Randolph & The Family Band albums. Over the years Randolph has been a guest performer on albums by among others: the Dirty Dozen Brass Band, the Dave Mathews Band, Los Lobos, Ringo Starr, Santana, Elton John & Leon Russell, Robbie Robertson and Buddy Guy.

Randolph's concerts are known for their energy and dynamic performances. Randolph has been known to invite fans onto the stage to dance while the band plays on. It is not uncommon for the band members to switch instruments over and over again during extended jams—so much so that at various points during these instrumentals each of the band members is playing an instrument different from his original. This is a band that features superb musicians who are also world-class multi-instrumentalist virtuosos.

Memphis Crawl hails from New York City and Long Island. Lead singer Matty "Soulman" O'Brien (with his Jim Morrison-like stage persona) was influenced by Delta blues, classic rock 'n' roll and down and dirty funk. Along with guitarist Stevens, bassist Arvin Q. Rojas and percussionist Michael Powder, Memphis Crawl has played across the U.S. and in Europe. The group's motto is "play like it's your last night on earth!!" This fiery combo with its fan-base known as "The CrawlDogs" perfectly complimented the high-energy of Robert Randolph & The Family Band.

On a cool and somewhat drizzly Saturday evening in late July, Robert Randolph & the Family Band along with Memphis Crawl touched down at Westbury NY's the Space. The mid-sized venue was set-up for dancing with the orchestra seats placed slightly back from the stage to allow the fans to express themselves right in front of the performers.

ADVERTISEMENT
Memphis Crawl didn't waste any time getting the party started with its up tempo, big guitar and drum filled powerhouse set of originals and covers. Opening with a blast of rhythmic backbeat drumming and bluesy chord changes, the band blasted through a short set of songs that got the crowd on its feet and into a party frame of mind. The crowd responded with cheers and whistles when O'Brien asked, "How y'all doing? You want it nice or you want it nasty?" With little effort, the band quite easily whipped the crowd further into a state of frenzy with its blend of Americana-influenced music. O'Brien made certain that audience remained on high alert by jumping off the stage and dancing on the seats in the orchestra pit and the loge section. Highlights of the set included "Going Down," " Albuquerque," the cover of the Doors' "Five To One" (which was played after an audience member requested the tune), "Every Time I Get Excited" and "Mucho Heavy." The band is also fan and audience friendly. An audience member named Peter Langley was so moved by the performance that he not only interacted with the band, but when he whipped out a harmonica and asked if he could play, O'Brien and the band accompanied Langley on an extended instrumental jam that would have made any blues fan stop in his or her tracks.

After a short intermission, Robert Randolph & the Family Band strolled onto the stage. Randolph sat behind his specially constructed pedal slide rig and the band settled right into it, opening with Black Sabbath's "War Pigs." The song was performed as a kick-ass instrumental. "War Pigs" eventually segued into a funky version of Sam & Dave's "I Thank You" and it, for lack of a better word, was on. The majority of the crowd members got out of their seats went to the front of the venue and began dancing near the stage.

Highlights of the band's set included "Love Is The Only Way," "Up On Cripple Creek" sung by Haas, "Shake It Off" and a superb version of Elmore James' "The Sky is Crying" (which many audience members identified as a Stevie Ray Vaughan tune). The best moments of the evening were during "The March" (which featured a snippet of "Revival" by the Allman Brothers) and "I Don't Know What You Come To Do" both of which were originally released by Randolph and the Family Band on Live at the Wetlands. When Randolph introduced "The March," he said, "Let's get ready for 'The March' y'all. 'The March' comes with a dance that makes you feel good inside." The band then roared into the song and, of course, Randolph stepped away from his instrument to take the opportunity to shake, bop and dance with joy. During the instrumental portion of the concert staple "I Don't Know What You Come To Do," the band members engaged in the instrument switcheroo. The switching of the instruments was so smooth and so effortless, that those who didn't see if would never have known. Seeing it in-person was absolutely awe-inspiring.

The main set ended with "Love Do What It Do," a tune that the band originally recorded with Darius Rucker. During the song, cousin Ray on bass, cousin Marcus on drums, little sister Lenesha, etc. all departed one-by-one as Randolph introduced them while he continued to play. Eventually, Randolph stood, took his bow and walked off.

After what seemed like only a few seconds, Randolph came back for the encore. He then accompanied himself on "She Got Soul" and "Got Soul."