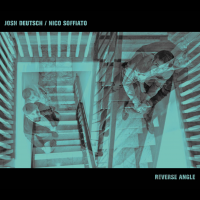 Trumpeter Josh Deutsch and guitarist Nico Soffiato have been working together since 2006, deepening their rapport and forming strong musical bonds in the ensuing years. Five years after they first connected, these men delivered Time Gels (Self Produced, 2011)—a duo debut which found them codifying their language. Now, Deutsch and Soffiato return with their sophomore release, a more sonically scopious affair that builds and expands on the sound of its predecessor.

Reverse Angle is short by today's standards, clocking in under forty minutes, but it's rich in musical content. There's music built around a simple loop ("Time Gels #3"); a melodically-centered take on a standard that finds Soffiato on baritone guitar ("Someone To Watch Over Me"); a bleak canvas that finds Deutsch trading his trumpet for piano ("Silica Sand"); and a pleasant yet eerie balladic goodbye that's lightly coated with JC Maillard's electronic trim ("Mix Tape"). There's also a stumbler-turned-swinger that opens with Monk-ish allusions, contains four-to-the-bar guitar comping, picks up steam, and features some hot jazz runs from Deutsch ("Tongue Twister"); a piece that's all about growth and intensification, beginning with a measured stop-start phrase and blossoming into an all out rocker with some help from guest drummer Zach Mangan ("Reverse Angle"); and an episode in extemporization that's built atop the foundation of Beethoven's "Sonata Pathétique" ("LvBsP").

While guests, instrument changes, recognizable material, and intriguing structural devices all contribute to the success of this recording, the album's strongest selling point is simply the relationship between Deutsch and Soffiato. There's a comfort level in their exchanges that makes this music a pleasure to behold, regardless of complexity or intensity. It's interesting to observe their occasional confrontations or left-of-center encounters, but the most easily pleasing moments here are the ones built around their open lines of communication ("Quinine"). Reverse Angle is a concise musical treat that speaks to the strong level of trust and understanding that exists between Josh Deutsch and Nico Soffiato.