By NICK TIPPING
September 3, 2010
Sign in to view read count 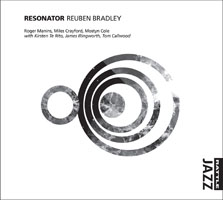 With debut albums, the temptation is often to throw as much as possible into the mix, to demonstrate the many tricks the artist has in his/her bag. On his first release, Resonator, New Zealand drummer Reuben Bradley does, indeed, draw inspiration from far and wide, describing the album himself as "eclectic."

But the album is far from haphazard in its construction; the different styles and influences do occasionally surprise, but on repeated listening it becomes clear that this is not eclecticism for its own sake. Resonator, composed entirely of Reuben Bradley originals, makes sense— after two acoustic tracks, the synthesizer, Rhodes, and bowed bass on "Doppler Effect" bring the music back into sharp focus, a reminder that this is a carefully crafted album. The tunes sit well alongside each other, ultimately creating a mosaic from straight-ahead acoustic jazz and drum'n'bass fusion to a dash of electronica.

It's always a big step from the sideman's role to that of leader, but Bradley clearly knows exactly what he wants. While the odd time signatures and tricky rhythmic modulations may be a concession to the fact that this is an album by a drummer, Bradley does give each musician time to stretch a little, and it's fascinating to hear them explore the different sound worlds they have collectively created. Tenor player Roger Manins (Mike Nock)plays with his customary strength and depth, Miles Crayford brings both energy and introspection to the piano and keyboards, and bassist Mostyn Cole demonstrates flexibility in holding down a variety of grooves and soloing with real inventiveness. Guest spots from arco bassist Tom Callwood (Little Bushman) and keyboardist James Illingworth and vocalist Kirsten Te Rito (Bebe Deluxe) add variety; the entrance of Te Rito, in particular, on "Search in Progress," is like a shaft of sunlight, adding yet another layer of intrigue to the overall album.

ADVERTISEMENT
Reuben Bradley's drumming drives the music with confidence and precision, while maintaining a high level of artistry. The colors and textures of the kit underpin every track, and provide the thread that holds the whole album together.

A truly artistic album is like a window into the mind of the artist. Resonator is like stained glass—the different colors and shapes creating an impression that remain after the final track has ended.