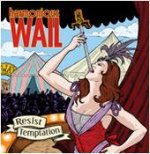 Django Reinhardt is often overlooked as one of the seminal figures in jazz. Jazz, a uniquely American art, became international in the hands of Reinhardt and his partner in crime, French violinist Stephane Grappelli. Reinhardt's jazz was colorful, natural, and spontaneous. As a trend setter, Reinhardt gave birth to many "gypsy jazz" combos, one of the best being the quartet, Harmonious Wail.

When Harmonious Wail was first reviewed on this website, with their release Gypsy Swing (Naxos World, 2003), the Django connection was mentioned as they were playing a mostly Django repertoire, including many of the usual suspects: "Sheik of Araby," "St. Louis Blues" and "Limehouse Blues" among them.

So how has Resist Temptation evolved Harmonious Wail's sound since then? A lot. The group has stepped off of the edge with no net, taking on the disparate musics of Tom Waits ("You Can Never Hold Back Spring"), The Velvet Underground ("Who Loves the Sun"), Steely Dan ("Home at Last"), and The Band ("Unfaithful Servant"). If that is not enough, Wail strolls through Spencer William's 1917 "Tishomingo Blues" in a most authentically organic fashion.

Added to these ingenious covers are the group's originals. "Lung Shan Temple Chant" is a wonderfully quirky eutectoid of music from the Far East and gypsy jazz. Wail captures the open-ended melody of China in a Western music confine and then improvises on it; the swirl of styles and genres is aurally intoxicating. The stop-time romp "Posh de Wash" is reprised from the band's first recording, Airborne (Bufflehead, 1993). "Posh" sports a sinewy harmonica solo from Howard Levy over a blues jag.

Of the covers, Steely Dan's "Home at Last" is the most striking as it comes in an unexpectedly delightful package. The once smoothly suave studio confection is rendered as a dark, Bluegrass tome, a transmogrification well effected. The Band's beautiful ballad of biblical Americana, "Unfaithful Servant," is delicately handled, providing a resigned sigh to Rick Danko's last prayer of a dying man. Resist Temptation is an excellent acoustic music recital by experts in the field.

Joie de Vivre; I like to Feel My Bones; Who Loves the Sun; Lung Shan Temple Chant; Only the Young; Posh de Wash; Tishomingo Blues; Home at Last; Unfaithful Servant; You Can Never Hold Back Spring.