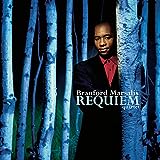 Telepathy. Elasticity. Forward looking. Branford Marsalis's new release, "Requiem" makes us glad Steepy brought back the quartet form to his music and makes us even more profoundly sad about the tragic passing of pianist Kenny Kirkland. Although the original plan was to get used to the material, hone it on the road and come back to the studio and re-record, this record shows a band as tight as any unit in the business and shows a great leap forward in Branford Marsalis's composing.

Why does Jeff Tain Watts, the busiest drummer on the planet, who tends to overwhelm in a quartet situation, not ever do that while playing with either Marsalis brother? This band is so in tune with each other that they can react to one another's phrases without falling into hackneyed call and response patterns. This quartet has the notion of modulating meter down pat; playing three over four, five over four, etc... while never loosing the swing. This is a direct continuation of the rhythmic ideas that started to bloom in Wynton's bands in the eighties. A listen to "Blues Alley" or "Black Codes" will sound very much in line with "Requiem," at least from a rhythm section standpoint.

A different type of tempi fluidity is this group's ability to basically play a funk tune ( Bullworth ) in patterns of 7/4, 7/4, 15/8, 7/4, thus keeping it fresh and forward moving. This in an idiom which is pretty much rhythmically static is a fine example of what I am referring to. In Lykyef, we see Branford leading the group in a setting that, while not totally free, is clearly dealing with implied tempi, that is, addressing harmonic meter. In this piece, the meter is dictated by how fast the changes go by. In this cut, the older brother to Wynton brings the group to the boiling point and finishes on a dime. Complete control, yet not placing restrictions on himself or his band. Wynton once said, "Everybody has their one great band." I think brother Steepy has documented his once again. I asked Branford not to long ago about his last quartet recording, "Crazy People Music," and he replied that it was an almost. This is a major vertical move.

So many sounds and elements that come from a non-jazz space get sprinkled throughout this 60-plus minute disc, that it takes a number of listens to deal with. The middle eastern sounding soprano work on Trieste serve as an example.

Finally, the record physically sounds great. Eric Revis, a member of Buqueshot, and a first call New York bassist is up very high in the mix, as opposed to "Crazy People Music," which had Reginald Veal somewhat muddled. Branford's soprano has a very nice balance to it, which allows for his lyricism to shine through. A word must also be said about Columbia's packaging, which places Marsalis's comments about his long-time friend and musical cohort Kirkland. It is a nice added touch to a record that is highlighted from start to finish by the musical conversation between the piano chair and that of the leader which is operating at a serious, serious level.