Andrew Rathbun / George Colligan: Renderings: The Art of the Duo 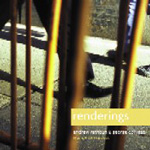 Renderings could be the perfect album for the jazz lover who thinks he doesn't like classical music, or vice versa. The recording is extremely beautiful for many reasons, in no small part because of the classical music chosen on which to improvise, as well as the leaders' own classically inspired compositions.

From the point of view of sheer sound, Andrew Rathbun's soprano saxophone timbre is almost flute-like in its lack of reedy coloration. Being extremely pure, it literally floats. George Colligan has an very fine touch, paying attention to dynamics and gradations of attack, clearly having spent much time with the classical repertoire and its performance requirements.

During the improvisations on classical themes, there's a strong feeling that the players have a working method and a point to make. The music resolutely does not swing at all. The harmonies also feel classical, yet are of the impressionistic kind that jazz has subsumed. The music has the feel of a recital, and no one could argue with the label of "chamber jazz, yet it's nothing like the Modern Jazz Quartet playing a Bach fugue, even though there is a fugal-like movement in Part 4 of Rathbun's suite.

So where does the jazz come from? Rathbun talks briefly about his desire to improvise on the composed theme without losing the spirit of the music. This they do; Ravel still feels like Ravel, and Mompou like Mompou. Even in the suite composed by Rathbun, the improvised sections stay within compositional boundaries. And yet, the vast majority of the time, the improvised sections are extremely clear, more so with the sax than the piano. Even a line that has been written to sound free or improvised does not necessary sound that way when juxtaposed against the real thing.

The key to hearing this difference is to focus on the relationship of the notes to the underlying pulse and subdivisions of that pulse. What becomes very clear is that in the composed music, the notes end up directly on the beat or its subdivision. However, during improvisation, the notes detach from the pulse and are free. Notating it would be impossible, and this is (part of) the freedom of jazz. Rathbun has the extra option of sliding into or out of notes. He doesn't do it much, and it's almost shocking when it occurs. Colligan's improvisations are a bit subtler, and sometimes the line between through-composed and improvised accompaniment can be blurry. But most of the time you know, despite the larger gestures that he uses.

This music is very deeply felt, and somehow the Third Stream label does not fit very well. Yes, Renderings communicates a feeling of working something out. However, the main feeling is a desire to communicate the emotions that these two wonderful players felt with and through this music.

Put Renderings on and chances are that you will find much to enjoy from the "other side.

Visit Andrew Rathbun and George Colligan on the web.