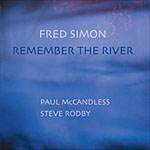 While most readers won't know the name Fred Simon, the pianist has kept admirable company over the years, including woodwind multi-instrumentalist Paul McCandless from the genre-bending group Oregon, and bassist/producer Steve Rodby, best known for his work with Pat Metheny Group since '82. Both artists team up with Simon for his latest release, Remember the River , and the result is an album that demonstrates everyone's strengths within the context of an album of gentle energies and subtle passions.

Simon's influences are broad—from Keith Jarrett and Lyle Mays to Joni Mitchell and the Beatles. He's a richly lyrical player who is more interested in serving the song than demonstrating his clearly fine technique, which, subsumed in the folk-like ambience of the record, is deceptive in its simplicity. While there's an improvisational component to the material—certainly this recording has some of McCandless' most eloquent playing in recent times—it's always within the context of a strong compositional element. With most pieces under the five-minute mark, and many under four, these are deeply visual miniatures that evoke the imagery of their titles in remarkable fashion. All too often song titles appear to be arbitrary choices—after all, you have to call a tune something —but when Simon titles a piece "December Together," he conjures a contrasting impression of winter cool and gentle romance.

While there's a general air of melancholy throughout this largely introspective album, that doesn't mean the album lacks dynamics, although they are generally more delicate and understated. McCandless' solo on the tender "Kore (O love, where are you leading me now?)" builds to a powerful climax, all the while retaining a certain finesse and elegance. And there's an elusive quality to Simon's writing that echoes a certain sentimentality without ever resorting to saccharine affectation.

Rodby has often been overlooked as a bassist, simply because he plays the role so well, providing a rich foundation without ever being intrusive or obvious. He is uncannily empathic—listen to him follow McCandless' rhythmic conceits on "Revolver"—but in the context of a trio such as this his role is even more significant. Every note counts, and along with Simon he gives the music a certain forward motion that keeps things from becoming too abstract or impressionistic, although he sits out on the more evasive "Listen to the Colour of Your Dreams, Part 1," and provides but a gentle underpinning to the rubato "Listen to the Colour of Your Dreams, Part 2." And among the more haunting melodies of the title track and "Miracle Enough," there is the soft optimism of "WWJTD."

Remember the River will appeal most to fans of the more lyrical side of Oregon, Pat Metheny Group and Keith Jarrett, but make no mistake, Simon has his own distinctive approach which, for a Chicago native, evokes surprising images of open spaces and broader vistas. And with the firm support of Rodby and the provocative playing of McCandless, he has fashioned an album of sensitive grace, charm and dignity.

Visit Fred Simon on the web.