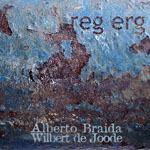 One of the many conventions subverted by music as open as this is the one of soloist and accompanist, and here piano and bass fuse in a way that lie outside of the tradition, even in any of its less inclusive forms. Both musicians are restrained in the sense that they're alert to the value of silence or near-silence, and the results are often marked by a certain angularity, as if each of them is over-compensating for the presence of the other.

That, however, is not a problem. On "Wadi," at thirteen minutes by some distance the longest piece here, the discontinuity of mood and level of input make for an intriguing whole. Alberto Braida's unassuming shards of piano notes work at odds but at the same time empathetically with Wilbert de Joode's arco bass.

The two minutes of "Dome C" find both musicians working with their instruments' extended vocabulary. Whereas in some instances this might be enough to guarantee a certain feeling of fatigue on the part of the listener, here it serves as another example of the diversity of territory the duo covers.

The understanding the duo has reached with silence is again apparent on "Tobol." They seem to court the idea of it as though it was the most seductive thing, before giving themselves up to Cecil Taylor-like dynamics, albeit with de Joode mapping out radically different territory to what Henry Grimes might have done in a similar context.

Set against this, the darkly elegiac "Adrar" could almost be the work of a different duo. Representing such a radical departure in comparison; such is the role of silence here that the duo could almost be said to have become a trio.

This is a recital the very diversity of which hints at whole other emotions by comparison with sets of free improvisation in which inspiration self-evidently flags, but of course that might be down to the very nature of the context in which the music is made. Here however the aesthetics of the free are reemphasized with unassuming vigor.

Visit Alberto Braida and Wilbert de Joode on the web.