Bobby Vince Paunetto and the Commit to Memory Band: Reconstituted

By JACK BOWERS
December 1, 2001
Sign in to view read count 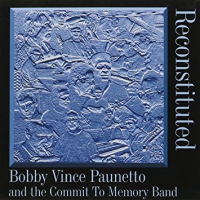 A dozen capably drawn charts by composer / arranger Bobby Vince Paunetto, several of which are worth committing to memory. Others, even while leaning toward "smooth" or "contemporary" Jazz, reveal more depth and character than is usually found in that genre. When present and accounted for, as it is on eight selections, Paunetto's Commit to Memory Band is what is commonly referred to as a nonet—three saxophones, trumpet, flugelhorn, trombone and rhythm (piano, bass, drums). It is comprised of a number of the New York City area's most respected sidemen, first-rate players for whom the term "all-star" wouldn't be inaccurate.

Some of the stars are given their own spaces in which to shine—flugel Tom Harrell ("Silva! Horn! & Down Pat!"), pianist Armen Donelian and bassist Mike Richmond (a duet on "Slovenly Hilled Curves"), pianist Bill O'Connell ("Reconstituted"), tenor Todd Anderson ("Dirt Cheap Meets Dirt,"), soprano Billy Drewes ("Turning on the Memories"). Elsewhere it's a team effort with bright solos by trumpeter Glenn Drewes, trombonist Larry Farrell, baritone Gary Smulyan and drummer John Riley. There are several dedications ("Silva! Horn! & Down Pat!" to Cal Tjader alums Jose "Chombo" Silva, Paul Horn and Pat Patrick; "In the Harbor of Cadiz" to Toots Thielemans; "My Brother the Great!" to Bobby Vince's brother, Ray Paunetto, who died in 1998) and three suites ("Reconstituted," "Foreign Glasses," "Emotional Currency"), although they are more akin to tone poems with only slight variations in mood or tempo. The songs that suggest "smooth Jazz" are three of those on which either Donelian or O'Connell plays Roland keys (which sounds like an electric piano or synth) instead of, or in addition to, piano—"Slovenly Hilled Curves," "Turning on the Memories" and "My Brother the Great!" But even though mellow and predictable, they are well-performed and hardly devoid of interest (Billy Drewes is especially engaging on "Memories"). If less than memorable, Paunetto's ambitious enterprise has more than enough rewarding moments to earn a positive endorsement.