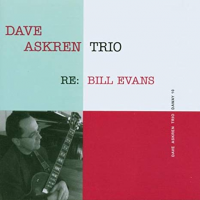 Los Angeles-based guitarist Dave Askren has undertaken a formidable project in adapting the music and style of Bill Evans for a guitar-bass-drums trio. In his liner notes Askren goes to a great deal of trouble to rationalize the validity and difficulties of this undertaking, insofar as Evans' influences for many of the selections and the difficulties of transposing his piano voicings on the guitar. It makes for an interesting story but, to these untrained ears, the question remains as to whether it all works or not. Unequivocally, these eleven tracks do bear the stamp of the late pianist.

In selecting these compositions, Askren has provided a good mix of Evans originals, standards and jazz standards that he frequently played, and one that he never recorded but could easily have ("When Sunny Gets Blue"). The mood is generally the introspective ballad performance that Evans was so noted for. A few tunes, like the Cole Porter "Everything I Love" and Gershwin's "Who Cares?", are taken at mid-tempo; while Miles Davis' "Freddie Freeloader" is the closest to an up-tempo jam.

Askren seems best able to share the Evans persona in the impressionistic adaptation of the Evans classic "Re Person I Knew," the Rogers & Hart "Spring is Here" and especially on the Young & Washington standard "My Foolish Heart." As would have been the case in the Bill Evans Trio, drummer Steve Sykes and bassist Mike Flick share in this project with thoughtful solo work and supportive playing.

Re Person I Knew, Spring is Here, Everything I Love, My Foolish Heart, Midnight Mood, Who Cares?, Time Remembered, Freddie Freeloader, It Might As Well Be Spring, When Sunny Gets Blue, If You Could See Me Now.