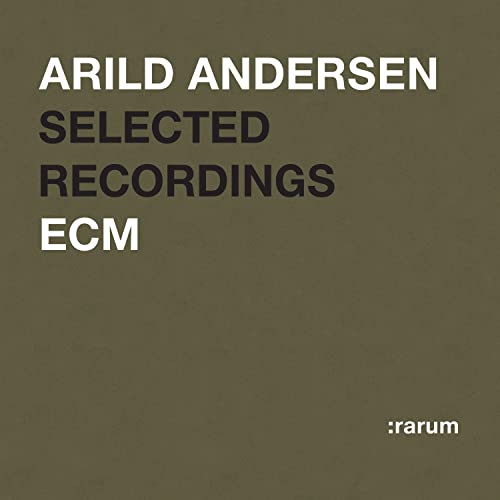 Arild Andersen’s career as a bassist of high regard without much public notoriety, particularly in North America, is explored on this latest ECM reissue. Like the rest of the Rarum series, the label turns the reins over to the artist in choosing from their various ECM sides and has the subject artist write the liner notes—Andersen’s reissue is no exception, and it helps make an excellent package.

The collection features both Andersen’s work with his own ensemble, which feature some key players of modern jazz, like Jon Christensen and Paul Motian, and his duet work with guitarist Bill Frisell and Ralph Towner.

One of Andersen’s greatest recorded works is included on this collection. "Vanilje" (from his Masqualero album), which opens this collection, centers around the rhythmic dynamism of Andersen with Christensen and Jon Balke while creating melodic space and openings for his trumpeter, Nils Petter Molvaer, and saxophonist, Tore Brunborg. This approach also proves effective on "Gardsjenta."

In addition to the above recording, the other standout highlights from this reissue are the two duet tracks Andersen performs with both Bill Frisell and Ralph Towner. Both of these tracks spotlight the artists’ virtuosity and ability to be complementary and dynamic. Frisell’s track is entitled "Shorts," from his 1982 recording In Line, and Towner’s piece, "For All We Know," comes from Andersen’s 1991 recording If You Look Far Enough.

This collection explores more of the modern and rhythmic elements that make up jazz. The Rarum series should provide the template to future reissues by other recording companies. The artists' input and insight makes for an interesting approach and execution, which from the five releases from this series that I have heard and seen, Andersen’s included, have been both refreshing in their nature (especially the more laid back feel, artist written liners and photos) and musically enjoyable experiences.