By KURT GOTTSCHALK
November 24, 2006
Sign in to view read count 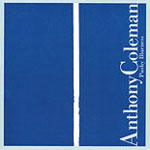 Anthony Coleman is such a dictionary of style and genre that he has been an invaluable sideman in the Downtown chronology for more than 25 years. His ability to adapt, reference and mimic gave breadth to the wide-eyed, nascent scene—and has also informed his own genre-busting projects.

But anyone who has listened closely has surely thought that there's not just an interpreter in him, but a composer as well, and potentially a pretty great one. And in fact, surprisingly enough, this is the first record he has recorded not as a bandleader, but strictly as a composer. He plays on only one piece, the fifteen-minute title track, but makes up for lost playing time by breaking out the mbira, piano, electric piano and khene. It's a sparse, blocky piece with percussionist Jim Pugliese keeping the crooked count and Doug Wieselman playing clarinet, bass clarinet and electric guitar. Despite the array of instruments, however, what comes through on all four pieces is Coleman's metered, smart and economic sensibility.

Pugliese also appears on a duet with Marco Cappelli, the most viscerally exciting piece on the disc. At less than six minutes, it's impossible to not want more—the finely parsed spits and sputters of drums and guitar could go on for an hour without nerve endings once being able to relax, but prudently, Coleman makes his point, revels a moment and moves on.

The other two pieces are the extreme ends of the instrumentation here, but again more than anything, they're reflections of Coleman's wits. "Set Into Motion, written for the Tilt Brass Band (French horn, trombones, trumpets, tuba, and Kevin Norton's percussion) and "The Hidden Agenda, played by pianist Joseph Kubera, are also varied, engaging pieces, never predictable but always oriented.

Coleman turned fifty last year and perhaps now is moving into the serious, mature role of composer. Judging from this set of music, it might prove to be his best move yet.