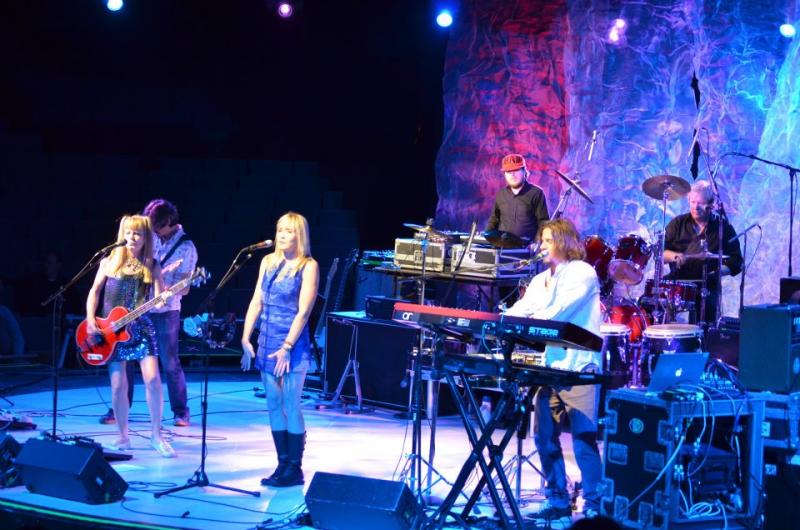 By MIKE PERCIACCANTE
October 29, 2011
Sign in to view read count
Psychedelic Furs & Tom Tom Club
NYCB Theatre at Westbury
Westbury, New York
October 7, 2011
Touching down at Long Island's NYCB Theatre at Westbury for the penultimate night of a short eighteen-date trek across the U.S., legendary modern rock bands The Psychedelic Furs and Tom Tom Club used their incredibly catchy, danceable and energetic music to teleport the dedicated disciples back to the mid-'80s/early '90s. Termed by Tom Tom Club bassist Tina Weymouth as "thirty years of Eighties music," the two bands each brought the adoring crowd to its feat. Though the small venue was not sold out, the appreciative audience made so much noise that a blind man would have thought the arena was packed to the gills.
From the very first thump of Weymouth's bass, coupled with the snap of Chris Frantz's snare and the scratch and twitch of Kid Ginseng's turntables, the new wave synth pop dance party was in full force. Weymouth—wearing a blue sequined mini-dress, opalescent silver sneakers and schoolgirl-like pigtails—and singer Victoria Clamp both looked adorable and euphoric as they camped it up danced around the stage. With Argentine guitarist Pablo Martine and Bruce Martin's keys, synth and Latin percussion rounding out both the group and the musical mélange, Tom Tom Club functioned as a well-oiled, funky machine.
Early in the show Weymouth introduced "Punk Lolita," from The Heads' No Talking, Just Head (MCA, 1996), by explaining that the song was about the girls who supported the entire band on the CBGB's circuit, "way back when." Weymouth continued by proclaiming that, "Now we're punk cougars!," thus setting the stage for an amazing evening of playful, exotic, yet melodic music layered over lyrics that were alternately thought-provoking and filled with nonsense. 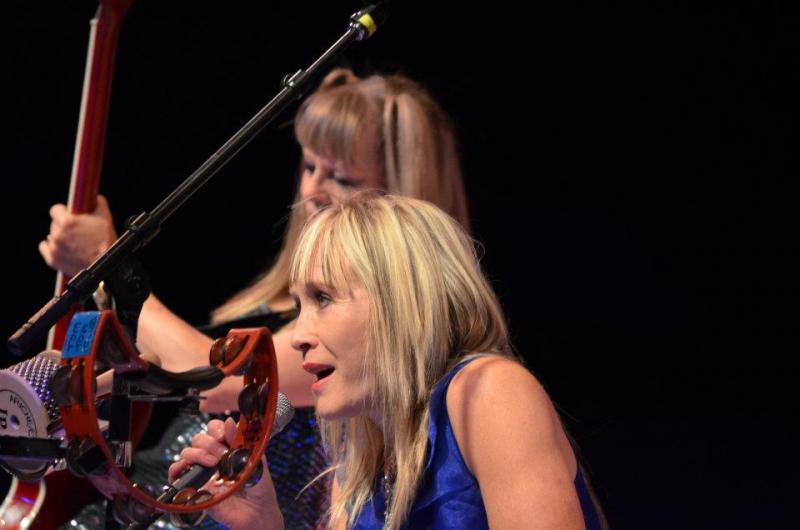 
Painting a musical picture that transported many audience members back to the New York City music scene of the 1980s, the group's amazing set drew heavily from the band's self-titled 1981 Sire label debut, prominently featuring "L' Éléphant," "On, on, on, on..." and "Under The Boardwalk." Prior to the long-form jamming version of "Wordy Rappinghood," Weymouth asked if there were any requests. An audience member responded by shouting, "Anything?" Frantz then countered with, "Anything you want besides human flesh..." Sporting a slightly receding, Bill Clinton-esque hairdo, Frantz, the keeper of the beat, also functioned as the band's de facto director from behind his drum kit, while barking out lyrics—most notably the "James Brown, James Brown" response refrain to Weymouth's and Clamp's chant-like purr of "Bohannon, Bohannon, Bohannon, Bohannon" during "Genius of Love."

Other highlights included "The Man With The 4-Way Hips," "She's Dangerous" and "Suboceana." The encores were a pair of surprises via longtime Talking Heads favorites, the Al Green cover "Take Me to the River," and "Psycho Killer," with a tour de force vocal supplied by Weymouth.

With the band's heavily syncopated rhythms begging and forcing the crowd to its feet, fans of both bands were treated to a special evening which, as Clamp pointed out, was truly "two headliners for the price of one." After a short intermission during which, the members of the Tom Tom Club signed CDs and DVDS, and shook hands with fans at the merchandise booth, the lights again dimmed and The Psychedelic Furs took to the stage.

The current incarnation featured lead vocalist Richard Butler, his bassist brother Tim (looking very cool in dark sunglasses, while lip-syncing to every song as he laid down the throbbing bass line), guitarist Richie Goods, keyboardist Amanda Kramer (The Golden Palominos, Information Society), and saxophonist/clarinetist Mars Williams (The Waitresses, Power Station, Billy Idol, Ministry) and drummer Paul Garisto. Jumping right into it with "Like A Stranger" and "Love My Way," the set mixed a number of well-known tunes with some deep cuts that were familiar to only a handful of hardcore devotees. 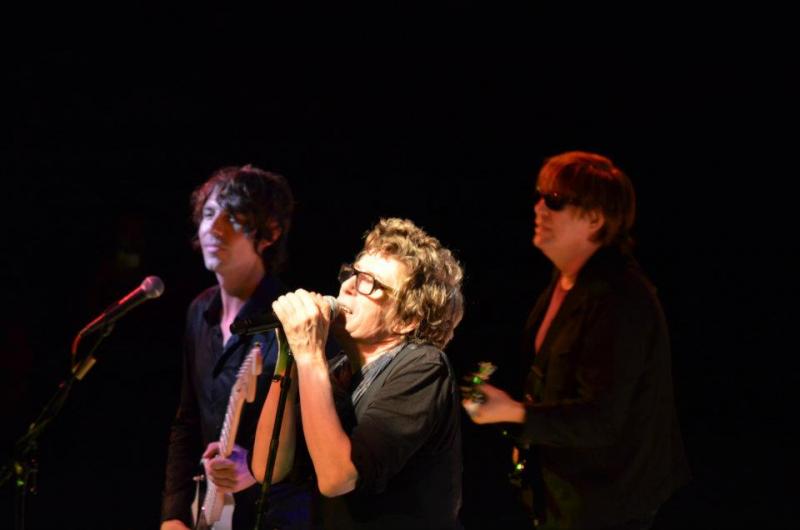 
Wearing his trademark charcoal black trousers, a matching vest over a black button-down shirt, and thick black glasses, Richard Butler commanded the attention of the audience, as he stalked around the stage, pirouetted, and jumped up and down in place between songs, as well as during the musical interludes. He also clapped and made quite theatrical gestures while dancing to his music and muse. His raspy growling vocals were spot-on as the band rocked solid on "The Ghost In You," "Heartbreak Beat," the as-yet-unreleased "Wrong Train," "No Easy Street," and, of course, their biggest hit, "Pretty In Pink." After each song, when the appreciative crowd erupted with applause, the tall, lanky Englishman grinned like a happy kid with a new toy on Christmas, bowed and offered a simple, "Thank you." 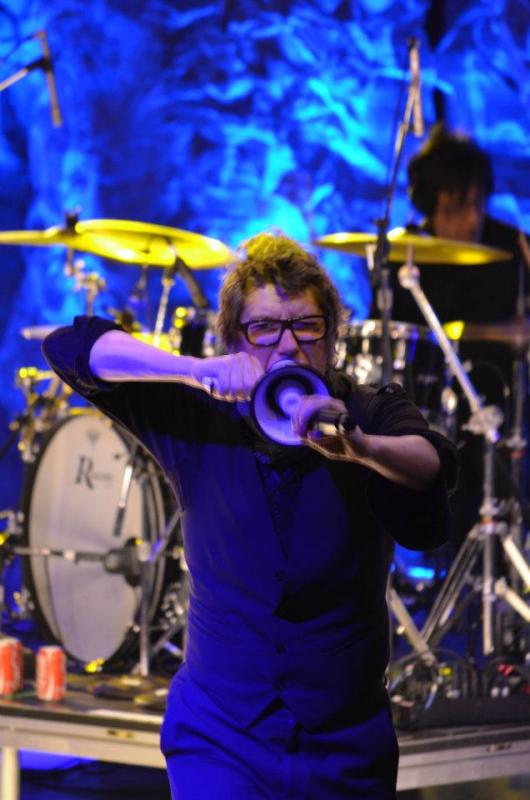 The band was firing on all cylinders as it ran through muscular versions of "Heaven," "Believe" (from the Butler brothers' Love Spit Love days, and featuring lyrics sung directly into a megaphone), "Danger," and "Alice's House" and "Highwire Days," two deep cuts from Mirror Moves (Columbia, 1984), as well as "Sleep Comes Down," from Forever Now (Columbia, 1985). Richard Butler's theatrical movements and genuinely joyous demeanor was infectious, causing the crowd's reactions to boarder on delirium.

Thirty years is a long time. Prior to the show, there was a palpable buzz in the crowd. Attendees wondered aloud, praying that the bands "still have it and don't look old." One fan said, "I hope they're good. I really hope that they can still play like they did back in the day." Both groups looked fantastic and the songs they played sounded as fresh on this night as they did in the '80s. They proved that they've still got it and judging by the reaction from the audience, the fans loved it.

Visit Tom Tom Club and The Psychedelic Furs on the web.