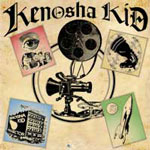 The first question any jazz lover would ask when presented with this release would be "What is this? The answer, as I see it, is, while not the Allman Brothers meets Russ Johnson, that Projector is some kind of as yet unlabeled jazz, with a distinct country-rock feel either over or under it, depending on your point of view.

Kenosha Kid is the name of an international jazz collective based in Athens, Georgia that composer and guitarist Dan Nettles writes for and leads. He has bands ready to play his material all over the world, and since the people he plays with in Georgia cannot pick up and travel, he moves himself around, hooking up with local players.

The music on Projector was originally written to accompany silent movies by Ladislaw Starewicz and Charlie Chaplin, but has be reworked into suites (The Kid Suite, The Mascot Suite, and The Hits). It is quite likely that if you did not know the original purpose of the music, its connection to film images would not be noticed. However, not being able to unring that bell, the music does have a strong feel of a story, closer to scenes than to images. The moods from track to track are quite varied, and so could be seen as following a film.

The instrumentation of the (Athens) band on this record is unorthodox: guitar, mandolin, trombone, accordion, bass, and drums. The accordion (and another instrument like it, the bandoneon) seem to be hot right now as a new sound, and I am getting quite used to it as a viable instrumental choice. Nettles uses his talented sidemen to create "non-rock music that rocks...'I hate music that doesn't rock somehow—even if it's quiet, it has to rock. Jazz has moved, and no one knows where to, and you can't keep it still or it dies. I steal the feel, the harmony, the many approaches to improvising, and put it all on my own canvas and mix it up.'

The most obvious feature these tracks have in common is that they are all very finely constructed. The arrangements provide a seamless mix of the written and the improvised, and Nettles can easily be regarded as a very good jazz composer within his self-constructed genre. The music flows and never stands still, both within and between tracks, giving the listener something new and unexpected every other moment. Even after multiple listens, the music still surprises and maintains a strong pull on one's attention. The thought did occur to me that Projector has more than a little in common with Ted Nash's La Espada de la Noche in some of its instrumentation but also its attitude of playing music that mixes genres and thus confounds expectations.

The music is beguiling, and after the initial "What is this?", quite a remarkable and totally enjoyable release. Indie-rock jazz lives!