Primus & the Chocolate Factory with the Fungi Ensemble at the Paramount 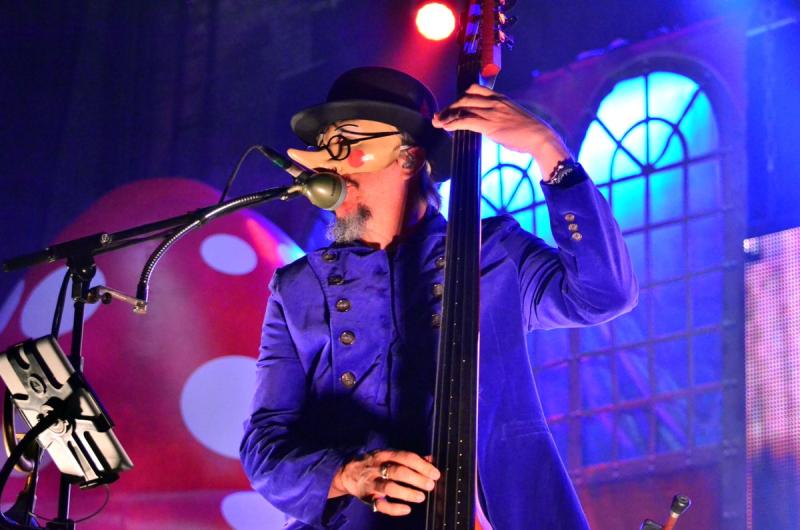 By MIKE PERCIACCANTE
May 9, 2015
Sign in to view read count
Primus & the Chocolate Factory with the Fungi Ensemble
the Paramount
Huntington, NY
April 25, 2015

The reigning champions of bass-driven avant rock made its appearance at Huntington, NY's the Paramount on a mild Saturday evening in late April. Since its inception in 1984, and its first release ( Suck on This released on Prawn Song Records in 1989), Primus has made its name by performing tongue-in-cheek, cutting edge, alternative, but always unique and original rock 'n' roll. With songs such as "John the Fisherman," "Electric Uncle Sam," "Jerry Was A Race Car Driver" and "Wynona's Big Brown Beaver" the band has amassed a huge international following.

Bringing with them, its most ambitious musical and staged show ever, Primus thrilled the sold-out venue by delivering two sets of its patented premium mix of alternative rock, pop, funk, experimental rock and progressive rock. The first set found the band playing in front of a curtain backdrop on a somewhat darkened stage featuring muted purples, reds, blues and a fuchsia-like mix of all of these colors. During this short set Primus delivered a variety of classic tracks including: a jamming version of "Those Damned Blue-Collar Tweekers," "Sgt. Baker" and "American Life," (each of which was released on the 1991 Interscope album Sailing The Seas Of Cheese), as well as "Moron TV" and "Jilly's on Smack," both of which were released on Green Naugahyde (ATO Records, 2011). Pork Soda, the band's 1993 Interscope release (which peaked at #7 in The Billboard 200), was represented with "Mr. Krinkle" and "My Name Is Mud."

The evening's second set was what many in the crowd had come to see. Bassist/lead vocalist Les Claypool, Larry LaLonde (guitar) and returning original drummer Tim "Herb" Alexander along with the Fungi Ensemble (featuring and a cellist and a percussionist) were set to perform a Primus-ified version of Roald Dahl's classic story Charlie and The Chocolate Factory. After set one ended and following a short intermission, the curtain was raised and Dahl's fantastical world of candy, huge magic mushrooms, bright vivid colors and Oompa Loompas came to life.

The phrase "Ladies and gentlemen, Elvis has left the building" resides in a special place within the heart of many a music fan. An appropriate subtitle for the evening's performance might well have been "Ladies and gentlemen, Anthony Newley has left the building." The adventurous musical score that Newley and Leslie Bricusse created for the 1971 Willy Wonka and the Chocolate Factory film was out-there and a bit weird for its time. Claypool and Primus added a slightly more bizarre twist and bent to it. This bass-heavy version of the story was a truly surreal multi-media experience. Claypool took on the role of Wonka (donning a waistcoat, purple top hat, an outrageous wig and a mask that featured a rather prominent nose), and was the ring-leader. The huge projection screen at the back of the stage showed distorted CGI-altered psychedelic snippets of the film as the band played while the stage was filled with lollipops, inflatable mushrooms and, of course, Oompa Loompas. It was truly a circus atmosphere.

The performance was somewhere in scope between Pink Floyd's The Wall and the Who's Tommy. It was a true rock opera with all the effects imaginable. Highlights abounded as the ensemble played a re-arranged version of the movie's soundtrack. The spooky and almost eerie version of "Candy Man," (this wasn't nearly as cheerful as the happy-go-lucky Sammy Davis Jr. version that almost everyone knows) caused concertgoers throughout the venue to stop whatever they were doing and pay close attention. "Cheer Up Charlie," "Golden Ticket" and "Pure Imagination" were pure Primus—irreverent, quirky, a bit freaky and offbeat with a flair for the absurd. The songs were also creepy, dark and nightmarish as they were augmented by the thumping bass and riff-filled swirling rhythms.

The encores, "Too Many Puppies" from the 1990 Caroline Records album Frizzle Fry, "Pudding Time" (from the same album) which segued into the reprise of "Too Many Puppies" and "Here Come the Bastards" from Sailing The Seas Of Cheese, mined the early part of the band's legendary career for some fantastic tracks originally released on the group's first two "classic" studio albums.

The evening was a trip through the collective warped mind of Primus, most notably through that of Claypool. Part rock opera, part traditional rock concert and part avant-garde performance art/happening set to music, anyway you slice it, the evening's performance was a sight to behold and the audience at the Paramount was treated to a spectacle its members won't soon forget.