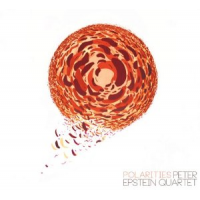 Polarity, depending on the usage of the word, can reference opposites, the carrying of positive and negative charges, or attraction to a specific point, object, or idea; saxophonist Peter Epstein's Polarities deals with all of that.

Epstein, a notable player on the New York scene in the '90s, has kept a lower profile since moving to Nevada, where he now serves as director of the jazz studies program at University of Nevada, Reno. His playing, thankfully, hasn't suffered one bit from the change of scenery. Polarities finds him in strong form, working with and against three of his longtime musical friends; this album may mark the first time that Epstein, trumpeter Ralph Alessi, bassist Sam Minaie, and drummer Mark Ferber were recorded as a single unit, but the saxophonist's ties with each man run deep.

Polarities presents as a wholly cohesive album, yet each track is an island unto itself. One piece may come off as the sound of the search ("Old Yarn"); another composition may be set in motion by rhythms that are jittery, funky, and bubbly all at once, setting the stage for a down-the-road sparring match between two horns ("Forever Now"); and another may simply represent four men set adrift, drawn toward and away from one another. Some tracks give pause to admire the power of singular musicians at work, but others draw attention away from the individual, focusing on connection and separation of ideas. Listeners get to hear Alessi let loose ("Tiny Expanding Universe") and observe Epstein unleashed ("Email From Nigeria"), but this isn't music that's completely centered on soloists; it's music of a higher order that's filled with endless surprises, continually coming in and out of focus, expanding and contracting in fascinating ways.

None of these tracks are cut from the same mold, or any mold for that matter, but they're all connected by the push-and-pull, join-and-repel notions of polarity.