By BRUCE LINDSAY
March 6, 2013
Sign in to view read count 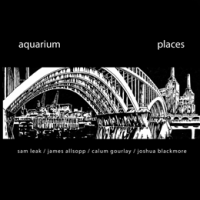 Aquarium is a young British quartet with a melodic and accessible approach to jazz. Places follows the band's acclaimed self-titled debut (Babel Label, 2011) and features the same lineup of exciting new generation musicians. It finds the band exploring in more depth the melodic and at times very spiritual music which characterised its debut and enhances Aquarium's reputation for high quality music.

The monochrome cover features a photograph of just one of Aquarium's members—Sam Leak. This emphasises Leak's key role in the band; as founder (in 2008), leader, sole composer and pianist; but Aquarium is definitely an ensemble. Although Leak's fluid solos loom large saxophonist James Allsopp's contributions are equally telling and the rhythm section combination of bassist Calum Gourlay and drummer Joshua Blackmore is a triumph of unselfish creativity.

There is tension and urgency on Places—notably on "Catherine Grove," named after a London street where Leak was robbed in early 2012—but Aquarium shows its strength with greatest success on the more positive and relaxed numbers. The east-meets-west groove of "Marrakech," the spiritual vibe of "Milan"—with Allsop and Leak at their delicately meditative best—and the romance of "Daybreak" are all the products of a mature and increasingly intuitive band.

While "positive and relaxed" may be the rule, "February" stands out as the exception. As befits a tune named after what is often the most miserable and gloomy point of the British winter this is a downbeat number. Leak's piano suggests the slow, heavy, footfall of a reluctant traveller, then Allsop's sonorous bass clarinet makes its appearance and the temperature falls another ten degrees. Yet the effect is graceful, lovely and ultimately life-affirming.

"Milan (Live)," recorded at the 2011 London Jazz Festival, features Sam Crockatt's intense tenor saxophone. It's denser and darker than the studio version, but the mix gives too little prominence to the saxophone and Crockatt's performance loses impact as a result. It's a slightly disappointing end to Places, an otherwise extremely well-recorded album from a fine young band.