By EYAL HAREUVENI
January 21, 2014
Sign in to view read count 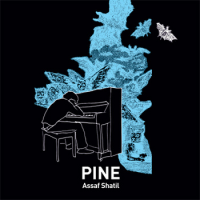 Assaf Shatil is a man of many talents. The Israeli musician is a pianist that studied modern improvisation in the New England Conservatory under the guidance of Ran Blake and Anthony Coleman. He leads a local jazz trio in Tel Aviv, he's a composer of contemporary music, singer-songwriter and occasionally also a visual artist.

His skills are distilled into his debut album, Pine, a collection of 12 songs that he wrote. The songs are orchestrated for a piano jazz trio—Shatil on piano and vocals, Avri Borochov on double bass and Aviv Cohen on drums, along with female vocalists, cellos and harmonium and brief improvised segments.

Shatil sings his observant songs with an unassuming voice, opting often for cyclical piano lines and delivers the songs with a highly reserved manner which sketch colorful cinematic experiences that call for simplicity in an emotional life wrapped with existential questions. But these seemingly simple songs are arranged wisely as chamber mini suites, emphasizing the melancholic, emotional content with pristine arrangements and meticulous articulation. The arrangement use imaginatively, the suggestive vocals of Karni Postel and Efrat Ben Zur, the depth of the cellos of Postel and Dan Weinstein, and the dark colors of the harmonium of Giori Politi. Cohen employs his drum kit as an instrument that enhances the dramatic progression of these songs.

He expresses painful emotional situations with concise means as on "Soft as Rain," "Checklist," and the title song. The implied words and the modest chamber arrangement are enough to portray the dramatic emotional experience and its sober, and still painful insights.