Bassist John Gray stops by to discuss Lorens Chuno's new album, Rhythm Sustained on which he played. The two musicians ended up discussing many things including the making of the album, Texas, Mr Know-it-all and many subtly related stuff. Rhythm Sustained features Lorens Chuno on vocal, piano, and percussion; John Gray on bass; Michael Vitali on drums; Takafumi Suenaga on piano; Michael Eaton on saxophone; Wayne Tucker on trumpet; Tom Larson on guitar; and Albino Mbie on guitar. 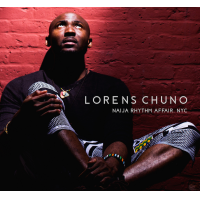 Having relocated to America from Nigeria in 2000 to pursue advanced studies in mathematics, vocalist Lorens Chuno was repeatedly drawn back into the music of his homeland, and found a novel method of fusing it with American jazz. Chuno, now an established university math professor, delved into his artistic persona in 2008, releasing “Highlife, Soul, and Ecstasy" that year, and “My House" in 2012. Naija Rhythm Affair, NYC, is a sophisticated blend of original compositions set in a progressive cosmopolitan ...