Vocalist Tamuz Nissim is in constant musical movement. The past three years have each seen a recorded release of 2017's Liquid Melodies (Self Produced), followed by 2018's Echo of a Heartbeat (Street of Stars), that very much set the stage for the present Capturing Clouds. All three recordings have in common guitarist George Nazos, whose musical empathy with Nissim has evolved over the three recordings to a beautifully lyrical maximum on George Harrison's “Here Comes the Sun" that closes Capturing ...

Tamuz Nissim: Echo of a Heartbeat 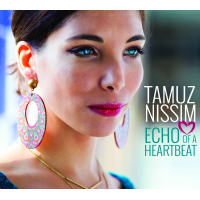 Tamuz Nissim is a young woman in the classic mold of a jazz singer. She can interpret lyrics sensitively, breeze through instrumental pieces with adept use of vocalese and scatting, and even write her own songs. She is originally from Tel Aviv but has lived in New York since 2015 and has cultivated relationships with several of the city's top flight jazz musicians, some of whom appear on this set. The light, sensitive feel of Nissim's voice is ... 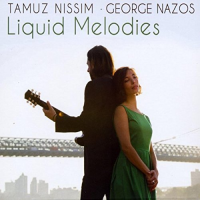 This meaningful title perfectly encapsulates the combined sonics of Israeli vocalist Tamuz Nissim and Greek guitarist George Nazos. When these two pair up they manage to develop a hydrous happening full of mellifluous designs, clear flowing thoughts, and dulcet tones. They're fluid in action, fluent in various dialects of the jazz language, and full of interesting ideas. In short, they deliver a solid performance through Liquid Melodies. The music that Nissim and Nazos create together is difficult ...

"New York City-based Israeli jazz singer" is a cultural metaphor, but that is exactly what singer Tamuz Nissim is. Born into a creative family in Tel Aviv, educated at the Royal Conservatoire of Den Haag, Nissim emerged into to a bourgeoning recording arena with the release of her debut recording, The Music Stays in a Dream (Self Produced, 2013), a collection of ten original compositions that was critically well received. Presently, she joins forces with guitarist George Nazos for Liquid ...