Wayne Krantz: Write Out Your Head

What do you want from Wayne Krantz anyway? It's a particularly relevant question when new release time rolls around for the guitar icon(oclast). Not that Krantz himself seems to give the question much thought. He's more known for being preoccupied with things like inventing (and reinventing) himself, exploring and capturing ineffable group mojo, or pushing the envelope toward things he has yet to try or accomplish. And, as many longtime Krantz fans would surely tell you, rightfully so. ... 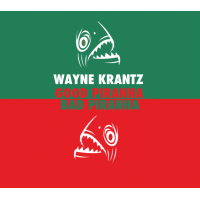 If Wayne Krantz seemed to be embracing vocals on Krantz Carlock Lefebvre (Abstract Logix, 2009), where he sang on a third of the tracks, then the transition seemed complete on Howie 61 (Abstract Logix, 2012), where he sang on eight of the ten tracks, with the guitar--at least as an improvisational tool--taking a back seat to more melodic concepts. Good Piranha Bad Piranha marks Krantz' return to instrumental territory and reunites him with long-standing sparring partners, Keith Carlock and Tim ...

It's taken guitarist Wayne Krantz the guts of twenty years to pen a CD of songs with lyrics and sing them. Howie 61 (Abstract Logix, 2012) is a departure from the music he has recorded previously, though Krantz, Carlock, Lefebvre (Abstract Logix, 2009) hinted at this new direction. There's less guitar work than might be expected from Krantz on this striking collection of compositions, but that maybe goes hand-in-hand with greater compositional depth. It's certainly got something to do with ...

It's rarely been the norm to talk about guitarist Wayne Krantz's singing, as the focus of his music has long been instrumental. That began to change with the sizzling Krantz, Carlock, Lefebvre (Abstract Logix, 2009), where Krantz sang on a third of the tracks. On Howie 61 Krantz sings on eight of the ten numbers. The notable evolution in Krantz' songwriting--which fuses composition and improvisation--is also heard in his increasingly melodic guitar playing. “I don't wanna follow a King I ...

Wayne KrantzHowie 61Abstract Logix2012He's long been a musician's musician and a guitarist's guitarist--there's a reason Steely Dan's Donald Fagen recruited him for his last solo disc, Morph the Cat (Reprise, 2006), and saxophonists David Binney and Chris Potter called him up for Graylen Epicenter (Mythology, 2011) and Underground (Sunnyside, 2006), respectively. Krantz's instantly recognizable, head-cocking idiosyncracies, combined with his distinctive harmonic language and effortless ability to groove, even at his most oblique, ...

Krantz Carlock LefebvreHighline BallroomNew York, NYApril 24, 2010In the music business, the term “crossover artist" usually refers to an artist who crosses over genres. For example, a rap artist whose album rockets to the top of the pop charts. However, since I couldn't readily identify what the heck was going on at the Krantz Carlock Lefebvre show at the Highline Ballroom, I'm going to refer to them as “crossover artists" as well. From jazz to ...

Although notable for being guitarist Wayne Krantz's first studio recording in fifteen years this is, as the title plainly suggests, very much a trio outing. Previously, Krantz, bassist Tim Lefebvre and drummer Keith Carlock have released live recordings through Krantz's website which whilst lacking to a degree in audio quality, nevertheless capture the power and excitement of one of the great electric trios.The challenges and freedoms engendered by recording with a serious outfit like Abstract Logix, for whom ...