In 1983, when the “new Artie Shaw Orchestra was formed (Shaw had been out of the music business for nearly three decades), Boston-based clarinetist Dick Johnson was chosen to lead the band, which he has done to this day. After Shaw died in December of 2004, Johnson decided to record a tribute to his long-time friend and musical inspiration, but he vowed that it would be more than a sweet and sentimental stroll down memory lane.

Johnson put together a ... 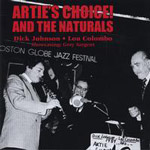 Multi-reed specialist Dick Johnson, who recorded for EmArcy and Riverside during the 1950s, is one of the most respected clarinetists today. He has been leading the Artie Shaw Orchestra for the past 22 years, with the blessings of Shaw himself. In 1980 Shaw wrote, “...You wanted to know what I think of Dick Johnson's clarinet playing. Okay. As of this time, He's the best that I've ever heard. Bar nobody. And you can quote me on that, anywhere, anytime!"