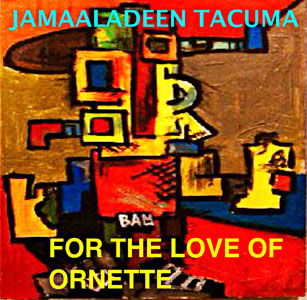 This is almost too good to be true: an “almost" Ornette Coleman album, blowing in out of the blue. Coleman isn't the leader on the set, but he's here, sounding as strong and true as ever. Bassist Jamaaladeen Tacuma joined the alto saxophonist/free jazz pioneer's electric Prime Time Group in the mid-'70s, contributing to Dancing in Your Head (Polygram, 1976) and Body Meta (Verve, 1976). With For the Love of Ornette, he teams with and pays tribute to ...

Coltrane Configurations: Funky Trane Is On The Road

John Coltrane resides in the pantheon of most, if not all, jazz lovers. Both fans of post-bop harmonies and free-jazzers appreciate his contribution to music. Many of his compositions became standards that have been played again and again by his many admirers. But few would approach Coltrane's tunes in the funky manner of Jamaaladeen Tacuma, who confesses that his main influences were The Temptations ...

Monster bassist Jamaaladeen Tacuma and veteran reedman Wolfgang Puschnig take on familiar territory with this new release. Tacuma, who has released several solo CDs over the years is best known for his affiliations with Ornette Coleman and the Music Revolutionary Ensemble.

Tacuma, known for his monster chops on the instrument, has few peers. Puschnig performs dutifully on the alto sax, flute and synthesizer. Puschnig has been somewhat of a mainstay with the Carla Bley Big Band over the years among ...