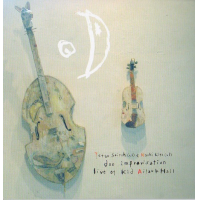 Japanese double bass master Tetsu Saitoh is one of the most original players of the bull fiddle. He is a resourceful and inventive free improviser but also feels at home when is playing Argentine tango, Brazilian music, Korean shaman music, obviously jazz or collaborating with poets, painters, dancers or theatre groups. All enrich his musical world and solidify his belief about the power of music. For Saitoh music is about believing. As he explains: “believe in ...

Japanese double bass master Testsu Saitoh is relatively unknown outside Japan. Most of his discography was released by small Japanese labels, including his own, Travessia, and naturally most of his collaborations are with East Asian musicians. Though he played and recorded with Western musicians, including fellow double bass players, as on the double bass quartet tribute to the late Peter Kowald, After You Gone (Victo, 2004), with Barre Phillips, Joëlle Léandre and William Parker. Saitoh approach to ...