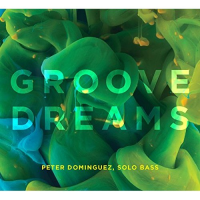 Groove Dreams resonates on a number of levels. In the most obvious sense, it's a testament to the skill, imagination, and resourcefulness of bassist Peter Dominguez, an artist who operates with a profound depth of understanding in both formal and creative realms. But it's also a link to the relationship that Dominguez formed with bass icon Milt Hinton, a showcase for the latter's finely crafted eighteenth-century Italian instrument, and a piece of documentary evidence indicative of the high value that ...