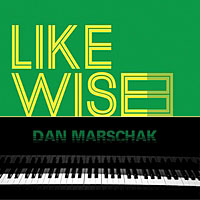 Dan Marschak's debut, Likewise, is a friendly jazz outing, showcasing the Los Angeles-based pianist/composer's compositional talents, piano chops and leadership role as both player and producer. With all but two of its ten tunes written by Marschak, its unconventional approach, melding elements of progressive, fusion, funk--even a touch of classical--makes for a varied and challenging first impression.The introduction of the opening “Caffeine Dream" sounds eerily similar to the opening bars of Ogden Nash and Kurt Weill's standard, “Speak ...