Is Shyla, reversed to become Alyhs, here an allusion to Alice Coltrane? Sanders's music encourages mental perigrinations, including semiotic ones. 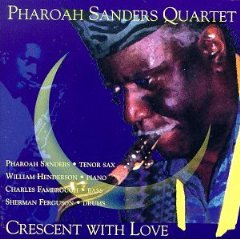 Saxophonist Pharoah Sanders worked extensively in John Coltrane's bands from 1965 until Coltrane's passing in 1967. At the time of making this tribute album, Sanders probably knew Coltrane and his music better than anyone outside of Coltrane's surviving wife, harpist/pianist Alice Coltrane, and members of his classic quartet, pianist McCoy Tyner and drummer Elvin Jones.

There is something quietly significant then in the fact that Sanders recorded Crescent with Love not one or two years before the 25th anniversary of Coltrane's death—as had other tribute makers, so that their discs could be released amidst all the useful publicity that could be anticipated during the anniversary year—but towards the end of the anniversary year itself, in October, 1992. For Sanders to have planned the release of the album to benefit from a short-lived period of heightened media interest might, to some people including Sanders himself, have seemed too calculating. Sanders, the chronology suggests, was inspired to make Crescent with Love by the anniversary itself, not by the prospect of marketing support seen from afar.

This sense of integrity is drenched deep into the music as well. Without at any time attempting to "be" Coltrane, retaining his own singular sound and style throughout, Sanders creates a uniquely vibrant evocation of Coltrane's genius at particular time in his development. Interestingly—some may say happily—the particular time Sanders chooses to evoke is not the late period Coltrane with which he'd personally been involved.

Sanders had been in Coltrane's bands from the depth charge that was Ascension (Impulse!, 1965) up until The Olatunji Concert: The Last Live Recording (Impulse!, 1967), a period during which Coltrane, in a final, perhaps desperate, surge of energy had taken his music out to the furthest edges. Instead of winding back to 1965-67, however, Sanders—who had included "Ascension" itself on his album Black Unity (Impulse!, 1971)—rewound further, to 1959-65, to focus on Coltrane the balladeer and optimistic spiritual celebrant.

ADVERTISEMENT
Of the nine tunes on Crescent with Love either written or recorded by Coltrane, seven were unveiled on 1962-65 albums for Impulse!—from Coltrane (Impulse!, 1962) to The John Coltrane Quartet Plays (Impulse!, 1965)—and the other two on even earlier, Atlantic albums, Giant Steps (Atlantic, 1959) and Coltrane's Sound (Atlantic, 1960).

Three other tracks—"Misty," "Light At The Edge Of The World" and "Softly For Shyla"—are associated with Sanders alone. Pianist William Henderson's peaceful "Softly For Shyla," previously heard on Sanders's A Prayer Before Dawn (Evidence, 1987), is an interesting inclusion in the context of a Coltrane tribute album. Shyla is used as a woman's name, but is it also an anagram? Is Shyla, reversed to become Alyhs, here an allusion to Alice Coltrane? A fanciful speculation perhaps, but Sanders's music encourages mental perigrinations, including semiotic ones.

Coltrane connections aside, Crescent with Love is also one of Sanders's finest mature albums. The sound he developed alongside Coltrane, and then burnished and refined on his own late 1960s/early 1970s albums, is here in its full grown-up glory—out there but lyrical, multiphonic but mellifluous. The production is simple and vivid, with Sanders and Henderson—whose rippling, at times harp-like cadenzas are in a tradition Sanders has favoured since his early masterpiece Tauhid (Impulse!, 1967)—to the fore without obscuring Charles Fambrough and Sherman Ferguson's solidly supportive bass and drums. Magnificent music through and through.


Tracks: CD1: Lonnie's Lament; Misty; In A Sentimental Mood; Softly For Shyla; Wise One; Too Young To Go Steady. CD2: Body And Soul; Naima; Feelin' Good; Light At The Edge Of The World; Crescent; After The Rain.