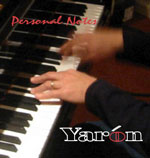 Personal Notes is just that, a personal musical statement by Yaron Gershovsky. He has worked with a long list of high-profile musicians, including Wayne Shorter, Dr. Lonnie Smith, George Benson and Michael Brecker. Most impressively, Gershovsky has been the music director and keyboardist for the Manhattan Transfer, with whom he is currently touring, since 1979.

This album is not for listeners seeking odd, quirky or cerebral music. Rather, this collection of mostly originals is direct and catchy, somewhat on the smooth side, but with a bit more feeling than what you usually hear on the radio. The rhythms and instrumentation also lean away from the purist view, using electric bass and a lot of electric keyboards within rhythms that are more likely to lull than shock. The tunes are constructed for direct communication, setting up and quickly fulfilling expectations.

The thirteen tracks vary widely in mood as Gershovsky exposes different sides of his musical personality. "Bliss" is a rolling, R&B-ish tune with Hammond B3 organ rendered large through overdubbing, while "Unchain My Heart" (one of two non-originals, despite some of the song titles) is given a straight-ahead, direct treatment that contrasts with many other vocal versions. "Modinha," by Antonio Carlos Jobim, is a soft and caressing as you would expect, while "A Junket To Bali" does not have any South Asian feel, rather a nice hop that makes it sound as if it could have come from a Broadway musical.

Gershovsky gives funk its due with "Devotion" and "Livin' It Up," which contrast sharply against the entirely different "Crossroads," with its synth lines, and "Midnight Sun" (not the standard), a pretty tune that evokes the image in its name.

Gershovsky clearly works on the pop or smooth side of jazz and enjoys being there. Personal Notes is not suited for listeners seeking adventure, but it could, in my view, be easily compared to Manu Katché's Neighbourhood, without the smaller recording budget and some of the world music sounds.