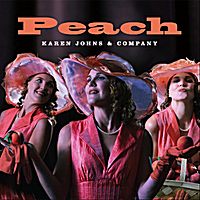 Singer/actress/dancer Karen Johns flirts hard with novelty on Peach, stopping at the point of faithful historiography. Her third recording features songs from her swing-jazz musical Once There Was a Peach, songs that emphasize swing era girl-group vocal chops flavored with a splash of mint julep. Johns sings most of the lead and harmony parts, a nifty trick that, if done with less talent, would have ended in hallow novelty rather than preservation or innovation. These are digitally close harmonies that sound modern enough to fit into the famous Star Wars bar scene.

The Andrews Sisters' 1941 hit, "Chattanooga Choo Choo," gets a faithful recreation by Johns, herself and...herself. Johns studied hard on this one, her inflections identical to those of the three sisters. She produces a version of an analog swing tune with a bright digital shine. In other quarters, this might be considered quaint. But, for those of a certain age whose parents shared the original with them, Johns manages easily to show both the appeal of the music and the genius of The Andrews Sisters.