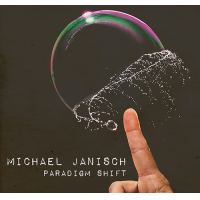 This impressive double album recorded live over two nights in 2011 at Pizza Express Jazz Club, London is Michael Janisch's follow-up to his 2010 debut album Purpose Built. The release has been some four years in gestation for the U.S. born, Berklee educated and now UK-based bassist and composer. Additional post-production electronics and effects were introduced over a period of roughly a year, between 2014 and 2015, yielding an extremely satisfying result.

The low groan of looped bass on "Fluid (Intro)" signals the start of Disc 1's set. Thoughout Janisch's four part "Movement" suite, repeated themes stated dramatically by the horns, specifically in "Movement II" and "Movement IV," make this an irresistibly memorable piece. "Movement I" is taken at a brisk pace, horns introducing a sprightly theme over an obligato bass line with a vital trumpet solo from Jason Palmer. The opening motif on "Movement II—Celestial Dictator" has a compulsive and lively Brecker Brothers feel and there are regular repeated references to it throughout, the whole track is propelled by the sheer dynamism of the rhythm section.

The interlude "Rage" is a solo for Janisch here on double bass backed by electronics. His acoustic bass playing is lithe and fluid. The short "Movement III—Part 1: Bailout" is characterised by dissonant angularity of harmolodic proportions before skilfully segueing into serene piano and keyboard-led "Movement III—Part 2: Spring." On "Movement III, Part 3: Inner Sanctum" Janisch employs doleful arco bass over a backdrop of electronics which juxtaposes dramatically with the ensuing short and breezy ensemble-rich "Movement IV—Liza-Flo" which incorporates a reprise to the central theme of "Movement II" augmented by some percussive handclaps. Janisch gives an effects-enhanced helter skelter bass guitar solo on "Be Free (Outro)" which has a faded-out ending.

Disc 2 represents a rather more heterogeneous collection of compositions since several of them were composed by other members of the quintet. On Leonardo Genovese's "Chacaraca" Palmer's trumpet explores the far reaches of a sonic landscape, enhanced by electronic and conventional instrumentation, closely followed by Genovese on piano.

"Mike's Mosey" by Janisch, is a vehicle for the bassist, leading from the front on pizzicato double bass with finely arranged intermittent interjections from the ensemble, with lightning pianissimo to fortissimo oscillations. Following a short sombre bass guitar solo ("The JJ I Knew"), also composed by Janisch, the dramatic and aptly-titled "Crash" ensues. At 15 minutes, the longest track and written by Jason Palmer is a fully engaging piece with handbrake tempo changes and featuring strong solos from Palmer, Paul Booth on tenor and Genovese on piano

Piano, synth and Zappa-esque electronic effects on Genovese's "One Eyed Calf" serve as an unsettling precursor to the finale "Awakening." This concluding number written by Booth begins in a deceptively pastoral mode but gradually becomes more frenetic with overlaid ring-modulator sounding keyboards, culminating in a satisfying ensemble resolution, tail- ended by a raucous tenor solo. If pushed to choose, the first disc, composed by Janisch, is superior to the second disc, mainly due to its compositional consistency, however both discs indubitably demonstrate just how brilliant Janisch's band sounds.