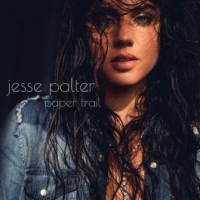 Carole King and her then husband Gerry Goffin once wrote a song titled "Will You Still Love Me Tomorrow?" It was condemned in some quarters as being likely to encourage promiscuity and this gave King and Goffin a certain cachet. The song was originally recorded in 1960 by the African American girl group The Shirelles and made No. 1 on the Billboard Hot 100 chart. It gradually lost all its notoriety and instead became a success story.

Jesse Palter is a great fan of Carole King. She wants to be a singer-songwriter, successful but also enjoying that cachet of notoriety. If her songs don't measure up to the ambitions she has for them, that's because they lack maturity. Palter's publicity says she has "committed herself to the discipline of perfecting the craft of songwriting." She has focused on "strengthening her creative muscles to discover what melodies, lyrics and chord changes work best, allowing herself to be vulnerable, brave and brutally honest at the same time. The songs are autobiographical, representing her life and what's she's been through."

Well, that's what the publicity says.

It also says, "Her eclectic musical upbringing includes exposure to a wide array of music that inspired her to deeply respect the art of great songs and songwriters, from Carole King and Joni Mitchell, to Prince, Michael Jackson, Stevie Wonder, Smokey Robinson and The Beatles. Music and singing was always in her blood. Her grandmother, Doris Raynor, was once an opera prodigy in NY." Jazz? She's done that too. "I was really immersed in the jazz scene in both Detroit and Chicago."

Palter now operates out of Los Angeles. "Anything goes out here, and I've implemented that in my approach to my music. Basically, I'm not limiting myself to any one scene or any one language in music. If I'm hearing a song with really complex harmonies and an intricate melody, I'll write that. But, if I get an idea that speaks to me and it's 4 chord pop, I'll go with that flow. It ultimately boils down to the intention: does it come from an honest place? Does it feel like me? Do I want to sing it every night of my life? I think it has helped being surrounded by so many people who are the real deal out here—it has inspired me to be the most ME I can be."

So does the album live up to all the fine words spun by Palter and her PR about it? Well.......

The opener, "Sever the Ties," sits on the fence. Does she really want to break up? We never find out before the song descends into repetition. "TMI—Wouldn't You Like to Know?" pursues much the same ambivalent course.

The third number, "Paper Trail" is very much better, meditative and reminiscent here and there of Paul Simon. Life, love might not be the crock of gold she had hoped for, but that's just how it is—"nice for just a moment in time."

"Waitin'" and "Heavy is the Crown You Wear" are more up-tempo, containing hints of better things to come. "Wildfire" comes close to being sensuous, while at the other end of scale, "Heart so Cold" records a failed dalliance.

As for "The Wrong Girl," well, yeah! This is a bit more like it—a defiant statement of intent from a lady who has sacked her publicist and struck out on her own, come what may. If she sticks to it, who knows, maybe one day Jesse Palter will get to where she wants to be in life: her name mentioned in the same breath as that of Carole King.

Sever the Ties; TMI (Wouldn’t You Like To Know?); Paper Trail; Waitin’; Heavy is the Crown; Wildfire; Heart So Cold; Alright in Time; The Wrong Girl; Goodbye My Friend.