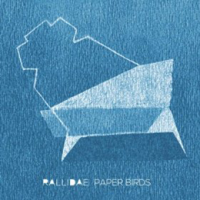 The British Trust For Ornithology helpfully explains that the Rallidae is a family of birds that includes such less-than-romantic species as the moorhen and the coot. Paper Birds is the debut release from a somewhat different Rallidae—a Brooklyn-based trio that combines improvisation with strong melodies and narratives.

The Brooklyn Rallidae is led by Canadian tenor saxophonist, vocalist and composer Angela Morris: vocalist Alex Samaras and bassist/vocalist Scott Colberg complete the rather unusual trio lineup. Paper Birds is a genuinely distinctive, and entertaining, combination of sounds and words.

"I Had Imagined Them, Unthinkingly" is Morris' setting of a poem by Johanna Skibsrud. Morris, Colberg and Samaras share vocal duties but it's Samaras who takes center-stage. His deeply resonant voice delivers Skibsrud's words with a powerful emotional intensity. Saxophone and bass weave in and out of the vocal line quite beautifully—at times the tenor sounds almost human, while Samaras' voice takes on an instrumental quality, a role switch that creates some fascinating harmonies.

The rest of the songs feature Morris' lyrics alongside her music. "Prettier" is a straightforward love song—at least, on the surface. "Every hair on your head is prettier than you know," sings Samaras, but his edgy, forceful, delivery and anguished extemporisation suggest something more complex—Colberg's understated bass playing is particularly fine on this song. "Smells Like Paint" opens with the excellent "Excuse me girl, I couldn't help but notice you make it hard to focus on drinking my ninth beer." Samaras soon morphs from the guy with the pickup line to the girl he's trying to impress before he and Morris break into an improvised voice/sax interaction that suggests the guy is unlikely to get anywhere.

Put aside all talk of coots, this all-too-brief four song EP announces the arrival of a far more romantic Rallidae. Paper Birds is an exceptional debut from an exciting and innovative new band.

I Had Imagined Them, Unthinkingly; Prettier; Smells Like Paint; Long Time.