By MARTIN LONGLEY
March 6, 2008
Sign in to view read count 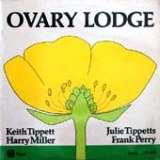 One of the almost mythical bands of early British free jazz history, Ovary Lodge was led by pianist Keith Tippett, although he would definitely stress that he was a figurehead-organizer rather than authoritarian boss. This is, after all, a collective that's dedicated to the most extreme form of improvising and abstraction, with no prior discussions allowed over the direction of each new piece. At the time, this was something of a departure for Tippett, but over subsequent decades, such hardcore improvisation has become the foundation of his work.

Beginning as a trio, in 1971, with percussionist Frank Perry and bassist Roy Babbington, they released an eponymous titled album in 1973. Ovary Lodge lost Babbington to Soft Machine, and he was replaced by South African exile Harry Miller. This is, confusingly, the band's second self-titled album, recorded in 1975, live at Nettlefield Hall, London. By this time, singer Julie Tippetts was becoming a regular guest, whilst Miller and Perry still remained with Keith.

There's absolutely no compromise with the opening 14 minutes of "Gentle One Says Hello," which certainly makes no attempt at being an easy path inwards to the group's minimalist sonic sphere. It has as much in common with Stockhausen territory as it has with any distant jazz memories, particularly when hearing Julie's high vocal acrobatics. Perry is singing too, up in a similar range. Much is made of drones and lashed cymbals, with the Lodge's chief influence being Far Eastern ritual music (please file under Avant Buddhism...)

The next piece, "Fragment No. 6," is the one with which most bands would have opened the album, a jazzier pulse ensuing, with Miller's walking figures and Keith's rippling up and down the keyboard's entire spread. Julie's sopranino recorder sounds trillingly Chinese, but later, Perry whips out the real deal, with his sheng mouth organ. "Communal Travel" is another extended rumination, at nearly 18 minutes, and has the strongest Oriental sound, with Perry exploring his full spread of gongs.

It's possible to see how this album is very much of its time, and that some cynics might dismiss it as an aimless hippy happening. Even this reviewer, an avowed admirer of this band, and all music Tippettian, had such thoughts flitting past during some stretches, but the Lodge's high level of musicianship, careful listening abilities and philosophical bent, tend to overcome most of these uncertainties.

Gentle One Says Hello; Fragment No. 6; A Man Carrying A Drop Of Water On A Leaf Through A Thunderstorm; Communal Travel; Coda.