By DEREK TAYLOR
October 7, 2005
Sign in to view read count 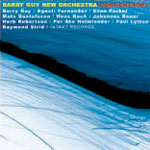 As a general rule of thumb, the bigger the band, the larger the role of logistics and finances in dictating its survival. In response to just such variables, the London Jazz Composer's Orchestra, one of the most venerable and prolific among large-scale European improvising outfits, underwent a necessary and indefinite hiatus back in 1998. Two years later a pruned down and reconfigured version resurfaced under the mantle of the Barry Guy New Orchestra. Ten pieces might seem a bit slim when it comes to justifying an "orchestra assignation, but when the players are as redoubtable and renowned as those selected by Guy, the appellation becomes more apropos.

Inscape Tableaux, the streamlined offshoot's debut, placed as one of the finest releases of 2001. On this, its second album for Intakt, the band relies on a slightly different roster while drawing on Guy's work in other projects over the past several years, most notably his trio with pianist Marilyn Crispell and percussionist Paul Lytton. Here Lytton still shares the drums duties with Strid, though Crispell is replaced by the more than capable Spaniard Agusti Fernandez at the keys.

Several thematic elements from the trio's Ithaca album thread through the disc's three expansive tracks. Guy constructs each section with dynamic schemes and structures in mind, regularly parsing the band into various subdivisions of duo, trio and larger to get the job done. Grand skyward sweeps fluctuate with detailed ground-scale gestures to create a whole that refuses to view the orchestra as a single monolithic body.

Each of the three sections opens with a solo reed seguing into duet with Guy. Hans Koch's mercurial bass clarinet annexes the first tandem slot, crafting an improvisation that wends and weaves against prickly and morphing counterpoint from a revolving component cast of colleagues. Parker's cool-toned tenor engages Guy's fibrillating strings in the opening minutes of the second track, the pair echoing their various past meetings in miniature. Gustafsson augers the honor of facing off with the leader in the final track with his bastard fluteophone, but it's Parker's soprano that eats up the most minutes in the lead, riding out the cascade of wildly riffing horns on the tenacity of a single circulating breath.

Betwixt these markers exists plenty of space for virtually every conceivable assembly of players. Holmlander's stout tuba in concert with Robertson's demiurgic trumpet; the horns en mass tracing a harmonized motif that almost sounds akin to an orchestral Oliver Nelson chart: these are but a few of the highlights. Together they constitute an aural abstract that effectively encapsulates the cosmic connotations and of the phenomena named in the disc's title—a mutable comet-generating cloud of space debris stretching over light years of distance—while at several junctures erring a shade too liberally on the side of the overly gelid and clinical.