By GINA VODEGEL
September 17, 2005
Sign in to view read count 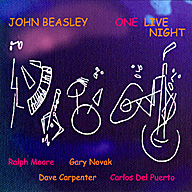 Labels aren't really relevant to John Beasley's new release. His music ranges from modern jazz to free improvisation and fusion, with a funk groove at times. As a musician/composer/arranger and producer he likes to work in various areas, whether it's producing American Idol or nailing down the sound for a less conspicuous project he's got going. Based in the Los Angeles area, he just as easily finds himself working amidst the East Coast mentality of New York or the hectic pace he encounters in Japan. The influences translate in his music.

One Live Night was recorded live at the Baked Potato in Los Angeles and it illustrates the vibes and grooves of musical minds and spirits meeting. You can hear the audience respond to exhilarating moments; you can feel the musicians communicate. There's an interesting gathering of friends and colleagues here, including tenor saxophonist Ralph Moore, known for his work in Jay Leno's Tonight Show band and collaborations with established musicians like Dizzy Gillespie, Horace Silver, and Freddie Hubbard. Drummer Gary Novak has toured with Alanis Morissette and worked with Chick Corea, Michael McDonald, and Maynard Ferguson; he learned his chops growing up in Chicago, the musical habitat of his father, pianist Larry Novak. Dave Carpenter, a renowned sideman to many in the music industry, takes care of the electric bass, while virtuoso bassist Carlos Del Puerto rules the acoustic instrument.

The first track, "Thorn of a White Rose," features Ralph Moore as the perfect host introducing the others in this cast of musicians, building phrases circling the theme that lead to cleverly put "one liners" and exclamation marks on bass, keyboards, and drums. It's as if you can hear them tune into one another, blending the levels and grounds they're travelling as individual musicians while joining in this collective experience.

However, John Beasley's impressionistic signature and abstract nature reign, along with the funk and groove he also abides by with ease and intuition. His Fender Rhodes playing is tastefully lush on "Gahala," there's passion and rhythm in Wayne Shorter's "Parapheralia," "You Should Know" alludes to scenes of life and conversations we've all experienced one way or another, and it's impossible to ignore the absolute groove in "Altogether Marvelous," communicating a sense of desire and longing for days gone by. Ralph Moore sticks to his tune in "Less Mister Yes," a composition that highlights Beasley's connection with the cinematic language of film. Part Two dares the listener to be taken away in this spiral of sound and vision.

One Live Night is a pleasant and interesting collection of different moods, meanings, skills, and colors. It provides room for individuality as well as group interaction. It's bass, beat, and Beas talking, turning listeners inwards—or outwards, when giving in to the real danceable tracks that hold a promise for the freakier among us. Get up, give in, dance, and completely lose yourself listening here! It's worth it.