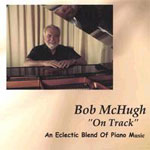 Bob McHugh has an has an impressive resume and has been on the New York metro scene for thirty years. On Track is a very pleasant collection of nine tracks ranging in style from the tango to rag to boogie and even three different Greek folk dances.

While his playing here cannot be called dazzling, each style is given a clear reproduction. For instance, the playing on "Back Porch Boogie would never be confused with Meade Lux Lewis, but a listener would now have a good idea of what a boogie is. Similarly, "Rocky Rag Tune contains all the features of a rag without challenging Scott Joplin. "Alison's Waltz is interesting in that the triplet feeling of the waltz time is disguised and kept more less submerged, while surfacing enough to allow the feel of a waltz. The one ballad, "It's Hard to Say Goodbye, is quite romantic and well done.

The Greek dances are particularly interesting since they bring an old folk culture alive through its music. "Kalamatianos and Karsilmas have obvious odd meters, the former in 7 (3+2+2) and the latter in 9 (2+2+2+3). Since I am not a Greek folk or dance music expert, I cannot say whether McHugh's compositions accurately create the appropriate atmosphere.

While it's not particularly challenging, McHugh's music on On Track has many nice features, including his touch and ideas when he is improvising. I would very much like to hear McHugh really dig into some meaty standards.