No Simple Highway: A Cultural History of the Grateful Dead 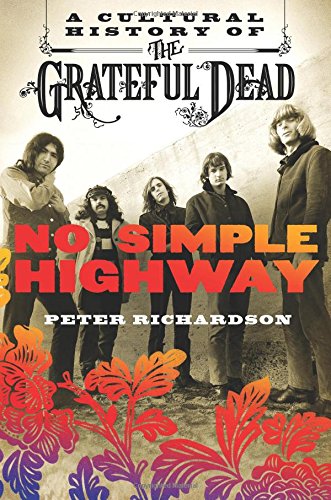 The declarative tone Peter Richardson adopts and maintains throughout No Simple Highway renders his depiction of the evolution of the Grateful Dead seem like nothing less than destiny. In fact, the way this erudite writer follows the evolution of the band, it's as if any story of modern American culture would be lacking without due reference to this iconic rock and roll band.

Yet in the early going of A Cultural History of the Grateful Dead, Richardson's writing, as befits his tenure teaching at San Francisco State University, radiates such a dispassionate air, it evokes fears the book will turn academic to a fault by the time it concludes. On the contrary, as the author moves his story along through the early days of the Dead's formation, their coalescence during the Acid Tests curated by Ken Kesey and their consolidation as a musical unit while mentored by sound guru and LSD chemist Owsley Stanley, the brisk pace belies an increasingly palpable warmth, to the extent that Peter Richardson sounds like nothing so much as a dedicated fan of the highest order by mid-point of these approximately three-hundred fifty pages (and his account of attending a Furthur show in 2013 is charming in its ingenuous air).

What distinguishes him and his writing from other tomes devoted to the Grateful Dead canon, however, is exactly that which makes it yet another essential entry. Peter Richardson's scholarship allows him to preserve healthy objectivity toward his subject(s) even as he chronicles the connections between the development of the group and its community with its obvious roots, such as Jack Kerouac and the Beat Generation, but also its not so obvious touchpoints, i.e. the exploration of the western United States (specifically the gold rush to California). And he posits the Dead zeitgeist's place in contemporary culture as, in turns, ballast for change in the Sixties and Seventies then turning into a venerable and durable alternative to the revisionist entropy in the Eighties.

As a result, then, while likening Grateful Dead tours in the later years to the traveling circus of the early twentieth century seems at first both facile and glib, upon reflection, Richardson's subsequent matter of fact explication, supplemented by guitarist/songwriter Jerry Garcia's customarily loopy observations, sounds entirely apropos, almost a logical natural and inevitable extension of the Barnum & Bailey enterprise. Still, the author wields a shrewd perspective on the differences in the two phenomena, a stance he also erects when he rolls out comparisons between the Dead and other performing rock bands, such as the comparably long-in-the-tooth Rolling Stones; that is, the elements of spontaneity and self- discovery aren't just integral to the experience, but absolutely indispensable components to the conception and execution of any enterprise to which the band and its extended family and working staff devoted itself. Thus, the growth of the Grateful Dead database and mail-order ticket system does, in fact, sound like the seeds of internet connectivity that grew up decades later.

Other books have rightfully highlighted the unusual attraction of the band's mindset that brought equally seasoned and exploratory figures, such as twenty-year plus sound expert Dan Healy, to work for the band and Peter Richardson gives such personages their due in No Simple Highway. In fact, it is quite obvious how much significance he attributes to lyricist Robert Hunter in the development of the group's artistic world view: he quotes Garcia's songwriting partner increasingly extensively as the book progresses, as often on the man's perspective on the group's work at large and its place in the cultural landscape as directly reflective of his compositional contributions to their music.

But the writer gives unusual and rightful due to the figures who were detrimental to the Grateful Dead's progression as a creative unit and a business operation, such as erstwhile manager Lenny Hart (father of percussionist Mickey) and Ron Rakow, the figurehead of their independent record label who, like the former, absconded with more than a little of the financial gains the band was able to generate as their recordings, at least for a time, were of equal importance in their overall work, to their concerts. And in linking those personalities to the naysayers early middle and late in the Dead's history, Richardson quite clearly depicts how the group's own willful detachment from their own self-contained world nurtured its healthy and extended its durability in the face of fashion and, ultimately, congruence with it, that is, their surprise breakthrough to the mainstream with "Touch of Grey," just a year after Garcia's brush with death in a coma in 1987.

The observation of certified Grateful Dead scholar Blair Jackson summarizes the group dynamic, in all its contradictions, quite accurately: " they reveled in their eccentricities and recognized the value of cohesion." Business dealings in the wake of their titular leader's death in 1995 exacerbated that precarious dynamic, but stability returned through negotiated arrangements that simultaneously preserved and protected their archives and the legacy upon which it's based. In recounting those events, Peter Richardson brings No Simple Highway to a somewhat abrupt close, but this is, with just short hindsight, a favorable coincidence; the timeline of his research made A Cultural History of the Grateful Dead the first of many publications issued during the year of the Grateful Dead's fiftieth anniversary and sets up subsequent edition(s) of this book to be more well-rounded sequels than is usually the case: this writer will no doubt illuminate the long-term significance of events such as the 'Fare Thee Well' concerts of 2015 in the same erudite and affectionate style he utilizes in this book.