Phil Minton: No Doughnuts in Hand 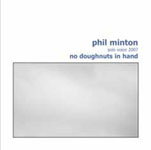 This album is the third part of an astonishing trilogy, following A Doughnut In Both Hands (1975-1982) (Emanem, 1998) and A Doughnut In One Hand (FMP, 1998). With its title, Minton seems to have heeded the advice he gave as a track title on In Both Hands—Too Many Doughnuts Make You Ill.

Minton himself notes that, "I would prefer to sing with other people and most of the time that's what I do, but it seems every ten years or so I need to sing a few songs on my own." The nature of these songs is as eccentric as the album titles. While there are obvious strands of continuity from those earlier albums, seemingly gone forever are the full-blooded vocal performances of 1975-1982, replaced by a far more exploratory, experimental approach to voice. The vocal improvisations here—ranging in length from twenty-four seconds to just under three minutes— are songs only in the sense that they employ the human voice. The sole exception is "Vo Be Dayish," an improvisation on a transcription by Veryan Weston of an improvisation by Phil Minton, which verges on scat singing, albeit employing non-standard vocal technique.

Non-standard vocal technique barely does justice to the rest of the tracks: "Para Five" and "Para Plus" sound like nothing so much as two cats hissing and fighting; on the twenty-two tracks in the "No Doughnuts In Hand" series, Minton variously sounds like a chronic asthmatic, someone speaking in tongues, someone with a speech impediment, a heart attack victim, a Looney Tunes cartoon character, Mr. Bean, a Tuvan throat singer, a signal generator... a dazzlingly surreal array of sounds that belie the fact that they were all created by one human voice. These are sounds from the outer limits of vocal technique; listeners should not lightly be tempted to try to imitate them, unless they crave a sore throat or worse!

The tracks—recorded over two days in April 2007 by Weston—are presented in the order they were performed and recorded. This makes it fascinating to hear the evolution and development of Minton's ideas and techniques, as he returns to further explore past themes. The "Breath Out" series of seven short tracks is particularly innovatory, as Minton investigates the results possible with the exhalation of a single breath. Is this the end of the series, or can we anticipate Minus One Doughnut In Hand? Let's hope so.