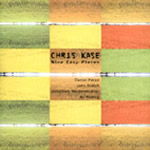 In his detailed liner notes trumpeter Chris Kase attempts to shed some light on the technical considerations behind the compositions on his latest release, Nine Easy Pieces. And it is true that there is a lot of meat in his writing; but what really makes this album succeed is the easygoing manner in which all participants navigate music that, while complex and considered at its core, sounds deceptively simple.

Lester Young once said, "Can you sing me a song?" and clearly Kase can. He may not be the most distinctive player on the scene, but he has a warm and inviting tone on both trumpet and flugelhorn; his playing demonstrates a lyrical elegance that makes every solo, every motif eminently singable. Whether it be on the brooding "Dark Interval," improvising around a brief 6/4 piano-bass motif, or on the more compositionally rich "Numero tres," Kase creates melodies which linger in the memory.

And speaking of rich compositions, Kase is another example of a contemporary writer who explores more extended compositional form, avoiding the tune-solo-tune format and, instead, creating a broader framework which still allows the group ample opportunity to stretch out. Remarkably, the group's improvisations are so thoughtfully constructed that it is sometimes difficult to differentiate between the written and extemporized. Canadian ex-pat pianist John Stetch is in fine form, seamlessly combining a European impressionist bent with a touch of American swing. Guitarist Daniel Perez displays ample chops, with a style that is sometimes reminiscent of John Abercrombie, as on "Loose Canon," other times recalling early-period Bill Frisell on "Hesitation Tango," a piece which Kase craftily built from a Samuel Barber piece.

Bassist Johannes Weidenmueller and drummer Ari Hoenig bring a delicate sense of rhythmic interplay to the proceedings. On Kase's reharmonizing of Kurt Weill's "Speak Low," Hoenig demonstrates the ability to provide a solid pulse that, at the same time, twists the time around, making it more malleable; Weidenmueller keeps pace with a full-bodied tone and intuitive harmonic perception.

Kase's own compositions, which make up seven of the nine pieces on the album, clearly owe more to the European tradition, with the possible exception of "Monje," which is Spanish for its influence, "Monk"; it is the only tune that really swings in a distinctly American way. By combining a sense of invention with distinctive themes Kase has created an album that, with an innate romanticism, caresses the ear; there is nothing confrontational about Nine Easy Pieces , but the title is also a misnomer as these compositions are by no means easy. The album shows how complex material can be made accessible; how less direct harmonies can still, somehow, be made to sing.