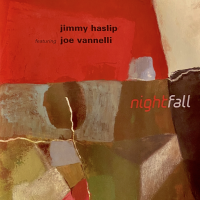 A previous Jimmy Haslip and Joe Vannelli record entitled Red Heat (Blue Canoe, 2020) was a sizzling and heartfelt creation born out of Haslip's profound love and admiration for his father. He would have shouted that from a mountain top (perhaps he did). Red Heat was a double-edged sword of pride and accomplishment.

The strength and inspiration for Nightfall was never blasted off a rooftop. Haslip's young daughter had a life-threatening medical problem that, understandably, was kept close to the vest as a personal family issue. Scared, worried, helpless, distraught, are only a microcosm of the distressed feelings one could imagine coursing through his veins. Haslip fueled his heart and head overload into Nightfall. Now making withdrawals from an untapped emotional bank, he channeled it all into every song, every chord, every note. A father's love for his daughter is powerful. Under the circumstances, it is remarkable that Haslip was so clearly focused.

At first, Nightfall could be heard as Red Heat 2. The shuffling percussion of Jason Hanna, Haslip's funky bass, and horn driven (tenor saxophonist Bob Mintzer, alto saxophonist Steve Tavaglione, and trumpeter Wayne Bergeron) rhythmic bounce, pressed against Joe Vannelli's trippy and mystic keys energize "Empath." Jimmy Branly's timbales spice "Xango," while the still empowered horn section blows open a door for the full depth of Haslip's Latin richness. Hann's congas and Vannelli's piano parallel, and merge, with the ensemble in this profound Haslip/Vannelli composition. As much as they had written together previously, Nightfall became a dynamic bond and alliance of Haslip and Vannelli as a songwriting team. They joined forces on all nine songs.

"Casa de Oro" brings a rich sheen to the constructive shift of Nightfall into its own voice. Vannelli and Haslip anchor a mid-tempo strut that takes the pleasant scenic route to the house of gold. A delightful stroll that floats in levels three and four, has Mintzer shining on tenor and Roger Burn echoing the symphonic overlay on his vibraphone.

Sophistication is a word that comes to mind in describing "The Third Man." Haslip's nimble and assuring melodicism keys Vannelli's synth lines and Hann's percussion, as the tune builds into an unexpected frenzy. The full tilt is attacked ambitiously by Tavaglione on soprano sax. The pace accelerates as Haslip furiously ramps to a raw conclusion.

The title track serves double duty as a lovely heartfelt ballad and as a portrait of the grace and beauty of "Nightfall." Supported by the sound of strings, a poetic duo is performed in earnest by Vannelli and Haslip that temperately leads to Mintzer's tenor serenade. Stella Castellucci's harp fosters a contrasting level of expanse. Haslip's electric fretless is worth the price of admission alone.

Haslip's upward moving core lyricism propels "Palo Alto," with Vannelli providing a breezy counter cushion. Nightfall's epic features the smooth and tasteful offerings of Katisse Buckingham. His alto flute brings spring to the air and melody to the ear. Haslip's seven string bass emotes a guitar-like voice that builds to another level against the pop of the triple horn section. Roger Burn again adds a softness throughout the mix. Buckingham returns to calmly walk us home.

A short percussive intro sets up a Haslip groove that quickly gives way to a percussion burst in "Red Coral." Haslip trades licks with Hann in a delicate and precise balancing act that pulsates throughout this uplifting number. Hann introduces the talking drum in with his congas and percussion kit. Judd Miller joins the party, meshing in unobtrusively, and adds a sparkle on his EVI (electronic valve instrument).

"Deep Waters," has three distinctions. Ross Vannelli joins his brother Joe and Haslip as a co-writer. He joins the band on acoustic guitar, as well. It's also the only song with a vocalist. Lori Perry does the honors, backed by the Perry sisters (Carolyn, Darlene, and Sharon). A song that speaks of love, inner strength, and devotion, emits the kind of emotion reminiscent of a church choir. "Deep Waters" heartbeat is palpitated by Haslip's innate feel and grasp of the moment, both on his electric fretless and a baritone guitar.

Nightfall closes "On Sunday" in a fitting manner, with Haslip and Vannelli again playing as one. Rich harmonies and soulful lines are deliciously aplenty. Burn's vibraphone softly penetrates the yield, as Branly's bongos fade to a memory. Haslip and Vannelli hold on to the spirit drifting into the evening sky.

Nightfall has a different muse than Red Heat. Still, they are family and belong together. Nightfall courageously pits hope and hopelessness eye to eye. Musically creative, it bridges intensity with patience, and balances an array of broadly talented musicians. Strong compositions with smart arrangements allowed the artists to take them to the next level. Sometimes an artist will dig deep into the well to find and unveil emotions. Haslip was sans shovel, with his copious feelings brimming to the surface and briskly pouring from his pores. It's a beautiful record, in no small part, because it is also a documentation of one father's love for his cherished little girl.