Ivan Farmakovsky: Next To The Shadow

By BRUCE LINDSAY
October 30, 2009
Sign in to view read count 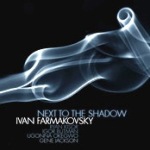 According to his sleeve notes for Next To The Shadow, Russian pianist Ivan Farmakovsky has a passion for football and from the quality of the tunes on the album, his passion for jazz is also abundantly clear. This is Farmakovsky's first album as a leader and while the music breaks no new ground, it is played with such enthusiasm and ability that it is impossible not to share this passion.

The tunes on this album, all written by Farmakovsky, reflect hard bop influences with occasional hints of Latin rhythms. Such an apparently narrow description does a disservice to the variety which characterizes these compositions, however. The album opens with the bass of Ugonna Okegwo kick-starting "Hard Blues"—which is exactly as its title suggests, a blues played in a recognizably hard bop style. The first solo goes not to Farmakovsky but to the tenor sax of Igor Butman: it's a warm and welcoming solo, reflecting the tone of the entire recording. "Pharmacology" begins with a delicate piano piece, ups the tempo as Butman and trumpeter Ryan Kisor enter in unison, then shifts tempo, as Gene Jackson's drums create a driving groove to underpin the solos. "Free Kick"—its title perhaps inspired by Farmakovsky's love of Moscow football team Spartak—begins with a real kick thanks to Jackson's drum intro and features a particularly enjoyable solo from Butman, a fellow-countryman of Farmakovsky who was also invaluable in helping to organize the recording of this album.

"Rain" is a gentle, bossa-nova style tune on which Butman and Kisor sound rather hesitant at times, but this hesitancy disappears on "Penguin Dance" which features some impressive horn playing. As a quintet piece "Penguin Dance" works well, as does "Russian Standard," but both of these tunes would also work terrifically as big band arrangements with full horn sections.

Farmakovsky is based in Moscow, but decided to record this album in New York's Sear Sound Studio—an indication of his love for New York jazz and his respect for the musicians and recording engineers who produce it. It was an inspired decision, rewarded with excellent musicianship and sound quality. Next To The Shadow is a welcome first album as leader from this engaging musician.