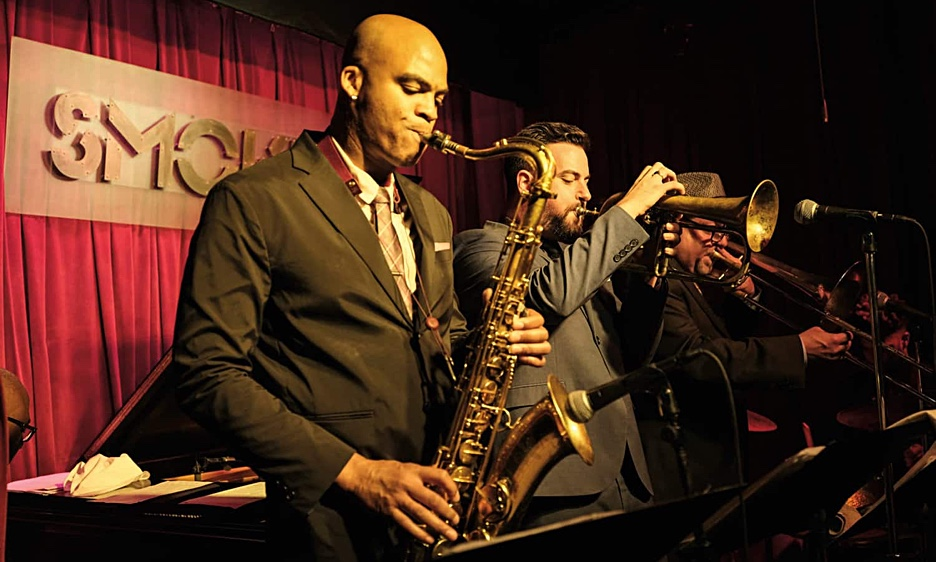 By
August 15, 2022
Sign in to view read count
One of New York City’s premier live music venues, Smoke Jazz Club, presents a stellar line-up of both legendary jazz performers and emerging voices for the fall season. Acclaimed for its essential music programming and inspired setting, Smoke Jazz Club recently reopened to much fanfare after being closed to indoor performances and dining for over two years. This revered institution has undertaken an impressive expansion and renovation that anchors its place as a world-renowned destination for the best in classic and modern jazz.

The great drummer Al Foster celebrates the release of his eloquent and important new recording. Available now on Smoke Sessions Records, Reflections pays tribute and offers thanks to loved ones and mentors such as Herbie Hancock and Miles Davis. Foster is well-known for his long association with Miles Davis. His melodic drumming and rhythmic inventions were the pulse of Davis’ bands throughout the ’70s and ’80s. In his autobiography, Miles related that he hired Al because, “he could set up shit for everyone else to play off and could keep the groove going forever.” Celebrated for making everyone around him sound better, Foster’s life in music has numerous other highlights including important work with Sonny Rollins, Herbie Hancock, Stan Getz, McCoy Tyner, and Joe Henderson. Rollins called him “the last of the great living jazz drummers.” This special Labor Day Weekend concert series features a simply brilliant quintet including trumpeter Nicholas Payton, saxophonist Chris Potter, pianist Kevin Hays, and bassist Vicente Archer.

Trumpet master Eddie Henderson’s “deft feel and plush sound made him a central figure in the worlds of jazz-funk and hard-bop in the 1970s” according to The New York Times. But the eternally youthful Henderson’s more recent recordings have also been widely acclaimed and prove that he is making some of the most important music of his career into his 80s. The Chicago Reader adds, “His progressive, assured, and imaginative improvisations roll out in a glorious sun-splashed tone… he seems to dance through his solos, balancing his quick clockwork technique with bursts of bluesy soul.” According to Downbeat, “His musical wisdom, gleaned during decades spent on the best jazz bandstands, informs every unerring note.”Henderson leads his peerless quintet featuring an incredible lineup of alto saxophonist Donald Harrison, pianist George Cables, bassist Gerald Cannon, and drummer Lenny White—all important bandleaders themselves.

“The jazz world needs more Steve Turres. A powerful technician with a soulful tone and quick wit, Turre is perhaps the leading trombonist of this generation.” —Rolling Stone

Steve Turre, a legendary artistic innovator on both the trombone and seashells, celebrates the release of his new album Generations (Smoke Sessions Records, TBR 9/16). His energetic and youthful ensemble includes trumpeter Wallace Roney Jr., saxophonist Emilio Modeste, pianist Isaiah Thompson, bassist Corcoran Holt and drummer Orion Turre, an impressive crop of emerging jazz voices. Turre’s own storied career includes work alongside music legends such as Ray Charles, Rahsaan Roland Kirk, and Woody Shaw, and he has consistently won both the Readers’ and Critics’ polls in JazzTimes, Downbeat, and Jazziz for “Best Trombone” and for “Best Miscellaneous Instrumentalist (shells).” A versatile master and true jazz original, he’s equally at home on everything from swinging classic bop lines or conjuring Rahsaan over a deep groove. Downbeat says, “Few artists ‘own’ their instrument to the degree that trombonist Steve Turre does. Whether playing the music of Rahsaan Roland Kirk, performing as a member of the Saturday Night Live house band or with one of his own units, his voice is distinctive and memorable."

Vijay Iyer was described by The New York Times as a “social conscience, multimedia collaborator, system builder, rhapsodist, historical thinker and multicultural gateway.” He is also one of the most celebrated and renowned pianists and composers of the 21st century. He is the recipient of a MacArthur Fellowship, among many accolades, and was named Downbeat’s Jazz Artist of the Year four times in the last decade. He was called “an American treasure” by Minnesota Public Radio and has been praised by Pitchfork as “one of the best in the world at what he does.” His most recent recording UnEasy features an illuminating and mesmerizing trio and he leads another one here with bassist Harish Raghavan and drummer Jeremy Dutton for his highly anticipated Smoke Jazz Club debut. Iyer will also feature special guest trumpeter Graham Haynes on Friday and Saturday only.

Originally influenced by the music of Art Blakey, Horace Silver, Art Farmer, and Benny Golson, the beloved sextet One for All has been called “New York’s premier hard bop supergroup,” by Jazz Times. “Cohesive and interdependent, these musicians bring out the best in one another,” adds All About Jazz. The band’s name is taken from Steve Davis’s composition and title track for Blakey’s final Jazz Messengers album, One for All. This original lineup featuring trumpeter Jim Rotondi, saxophonist Eric Alexander, trombonist Steve Davis, pianist David Hazeltine, bassist Peter Washington, and drummer Joe Farnsworth first performed together 25 years ago. Over that quarter century, One for All has delivered many unforgettable performances at Smoke, as they are sure to do again.

“Thomas is a dynamo at the piano, but he has an introvert's demeanor; his is a quiet, centered self-confidence.” —The Guardian

Pianist Micah Thomas is one of the emerging leaders of a new generation that is bringing fresh perspective and creative energy to the modern jazz tradition. In addition to leading his trio, Thomas is a steady member of the Immanuel Wilkins Quartet and the Giveton Gelin Quintet, and as a sideman for Ambrose Akinmusire, Lage Lund, Joel Ross, Nicole Glover, Melissa Aldana, Gabe Schnider and others. The New York Timesstates, “Only occasionally — a few times in a generation, even — does a pianist come along who seems to have gobbled up and processed so much music, their style can make sense of both jazz’s history and its present in a single motion. Micah Thomas is one of those players.”

“Villafranca is a Cuban pianist of high technical prowess and rhythmic clarity.” —The New York Times

Smoke is thrilled to welcome back Cuban jazz pianist and composer Elio Villafranca to celebrate the release of his latest album Standing at the Crossroads. This recording speaks about his own life experiences as an artist, growing up in the small town of San Luis, Pinar del Rio, surrounded by Congolese drums, educated in Russian classical music, while falling in love with jazz. Elio Villafranca leads his exciting group the Jazz Syncopators. Villafranca is a spellbinding pianist who has recorded and performed with master artists such as Pat Martino, Terell Stafford, Billy Hart, Paquito D’Rivera, Eric Alexander, Lewis Nash, David Murray, and Wynton Marsalis. He brings an original musical perspective and is at the forefront of an exciting new generation of musicians. Downbeat states, “Villafranca has emerged as a commanding presence on the jazz scene, not just in the U.S. but throughout the world.” The Jass Syncopators highlight the significant influence from the Caribbean region, specifically from Cuba, on jazz music from its earliest days in New Orleans.

In-Person $25-$60. Livestream $15. For more information and to make reservations visit our website (link below).