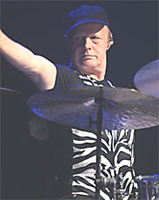 Larry Bunker's versatile drumming, vibes playing and skill as an all-'round percussionist put him in demand by jazz players, symphony conductors, film and television studios, and singers. He worked with an array of artists that included Gerry Mulligan, Pierre Boulez, Peggy Lee, Judy Garland, Dizzy Gillespie, Gary Burton and Michael Tilson Thomas. In the mid-sixties, Bunker (1928-2005) took time to fill an ambition. For years, he had dreamed of playing with Bill Evans, and for a year or so left his lucrative first-call Los Angeles life to go on the road and record with Evans' trio.

In this performance with Evans and bassist Chuck Israels, we hear--and see--why Bunker was so highly regarded for his playing with brushes. Following a rapid version of “Israel" and BBC-TV host Humphrey Lyttleton's farewell, Evans ends with his “I Got Rhythm" variant called “Five," toward the end working in a few bars each of “The Theme" and “Taps Miller." Throughout, he and Israels have spirited exchanges with Bunker.