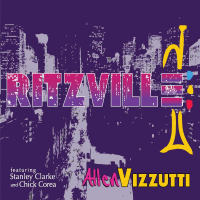 Trumpet virtuoso Allen Vizzutti has enjoyed a prolific career as performer and educator in both the jazz and classical fields since his early days with Woody Herman’s big band and his notable four-year tenure with Chick Corea. The release of Vizzutti’s superb new CD Ritzville, on October 16, is an especially welcome event because the in-demand trumpeter/composer has recorded all too infrequently as a leader. Ritzville brings the focus back to his primary passion of “performing music I love with my jazz group.”

Contributions from Vizzutti’s marquee-name friends Stanley Clarke and Chick Corea are featured on the boppish “Ticklish” and the up-tempo ballad “Amara” respectively, while the rest of the band includes old friends (the guitarist Mike Miller) and new (Portland-based pianist Darrell Grant) performing an array of standout Vizzutti originals, most of them written specifically for the Ritzville session. Pianist Laura Vizzutti, the trumpeter’s wife, is showcased on her namesake “Laura’s Blues,” one of four selections on which an 11-piece string section was added.

Recorded in Seattle, where Vizzutti has been based since 1990, Ritzville contains so many stylistic crossings, from groove-tight fusion updates to string orchestrations to acoustic ballads, the leader became concerned during the recording of it that the music was more varied than he had intended. Whether by serendipity or design, however, the songs fit together seamlessly, adding up to an invigorating statement by a multifaceted artist who is in command in all stylistic situations.

Author of the definitive trumpet method books that bear his name, Allen Vizzutti started on the horn with lessons from his father Lido, a self-taught trumpeter. As he was growing up in Missoula, Montana, young Allen played in school bands and, at 16, won a concerto competition that sent him to Interlochen, where he was awarded first chair in the World Youth Symphony Orchestra. He went on to study at the Eastman School of Music in Rochester, NY.

After a period of gaining bandstand experience ranging from Ice Follies shows to Bach chamber orchestras, Vizzutti had to choose between two tempting offers: lead trumpeter with Woody Herman and first chair trumpet with the San Antonio Symphony. He became a member of Herman’s Thundering Herd.

“The big band experience, which so many young players now never get, is so valuable in so many ways, and not just musical,” said Vizzutti. “We had people like Dizzy Gillespie and Tony Bennett and Marian McPartland joining us all the time. You got to see how great musicians handled themselves, handled rehearsals, bantered with the audience. You learned about timing, about stretching out musical moments to maximize their impact.”

Vizzutti met Chick Corea during rehearsals for a piece the pianist wrote for Herman. Corea later invited Vizzutti to join him for a three-month tour with his 13-piece ensemble, featuring strings and horns. The trumpeter also played with Corea sextets featuring Joe Farrell, Dave Liebman, and Steve Kujala and is featured on three Corea albums: Secret Agent (1978), Tap Step (1980), and Touchstone (1982).

In 1978, Vizzutti moved to Los Angeles. He joined Doc Severinsen and the Tonight Show Band, and played on more than 150 film and TV soundtracks as well as albums by Frank Sinatra, Barbra Streisand, and Prince. His own unique jazz-fusion band Red Metal made two recordings and performed regularly in L.A. and on tour over the next eight years. After his relocation to Seattle, he recorded several albums as a leader, including Trumpet Summit (1995) and Skyrocket (1996), both for Summit. It’s to be hoped that Ritzville marks the beginning of a new period of recording activity for this charismatic and virtuosic artist.

“I’m very grateful for my musically rich life,” says Vizzutti. “It’s exciting and a lot of fun to continue to improve as a player and performer. Ritzville is a calling card for a fresh new musical chapter about to unfold.”