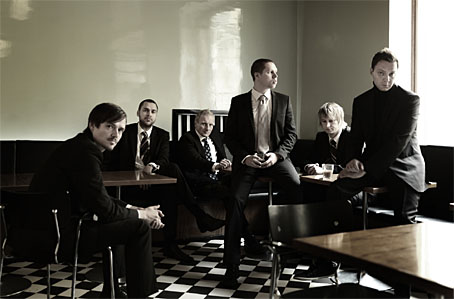 In 2005, The Five Corners Quintet from Helsinki took the international dancefloor jazz scene by a storm. Chasin' the Jazz Gone By, their debut for Ricky-Tick Records, a label that was initially conceived of as a vehicle for releasing the very first TFCQ vinyl single, proved out to be both an artistic and a commercial success story. For once and for all, the album proved that it is possible to look back while moving forward. The touch of producer-composer Tuomas Kallio was true to the golden era of modern jazz, and his vision in updating form rather than feeling resulted in music that is truly “postmodern jazz," if there ever was some.

Three years, some 50,000 sold records, and 100+ international gigs later, The Five Corners Quintet are set to return with their sophomore effort. The album, out on Milan Records in April is entitled Hot Corner, and everything about it indicates that the scene-leading Finnish ensemble has upped the ante. Rather, theirs will be the task of taking 2000 Century dancefloor jazz into another level.

Some things remain, of course. The sports axiom about not changing a winning team reigns true here, with a guest appearance by jazz vocalist par excellance, Mr. Mark Murphy, who also lent his golden voice to three tracks on the debut. This time around, however, it should come as no big suprise that a bunch of Finns manage to lure a living jazz legend to take part in their production, for TFCQ face high expectations when it comes to their return in recorded form.

The enormously successful live band consisting of Teppo Mkynen (drums/bandleader), Timo Lassy (sax), Jukka Eskola (trumpet), Mikael Jakobsson (piano), and Antti Ltjnen (double bass), also remains. On Hot Corner, however, the band takes a larger role in comparison to the first album. Tuomas Kallio is the “commander-in-chief" once again, but theres a stronger sense of community also in the studio.

The new sound of TFCQ could be described as leaning towards the Hot of the album title more than the cool of their previously recorded work. Here, the impact of the live band is evident. Kallio's compositions also move away from standard jazz into fresh new territories, where even the occasional flirt with genres such as rockabilly is to be expected. The EP preceding the album release already showed marks of the band “rocking" rather than “swinging," and those directions are further explored on the upcoming album.

One thing is certain: The Five Corners Quintet have a knack at searching and finding new directions instead of following paths trampled by others. Of this, their new album Hot Corner is an ample piece of evidence.