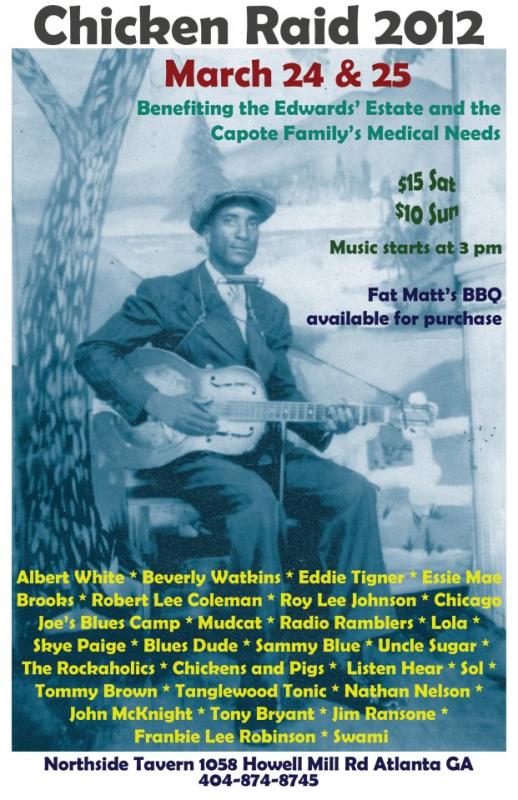 slideshow
The Chicken Raid is an annual music festival held at the NORTHSIDE TAVERN to honor the late beloved Atlanta bluesman Mr. Frank Edwards (1909-2002). This year the festival will be held on Saturday March 24 and Sunday March 25. The Chicken Raid offers a range of local, regional, and national talents. Proceeds from this year's festival will be shared between the Edwards' estate and Carlos Capote's medical costs. Capote, front man for Atlanta blues band Breeze Kings recently underwent a kidney transplant and has mounting medical needs. The Chicken Raid music festival is held at Northside Tavern located at 1058 Howell Mill Rd in Atlanta, Georgia.

2012 performers include Music Maker Relief Foundation artists Beverly “Guitar" Watkins, Roy Lee Johnson, Robert Lee Coleman, Albert White and Essie Mae Brooks. Additional highlights include Charleston rockabilly sweetheart Skye Paige, Washington DC blues and funk player Sol Roots, Mudcat, Frankie Lee Robinson, and Chickens and Pigs, to name a few. The event will be held on Saturday, March 24 and Sunday, March 25 at Northside Tavern in Atlanta, GA, located at 1058 Howell Mill Rd. Phone is 404-874-8745. Tickets will be available at the door and are $15 for Saturday and $10 for Sunday. BBQ plates will be available both days for $5. Music begins at 3PM, and Sunday kicks off with an acoustic gospel invitational.

A new community website has been designed for this event, featuring footage of Mr. Edwards performing his classic tune “Chicken Raid."

Born in Washington County, GA, Frank Edwards left home at 14 to play guitar and harmonica alongside Tampa Red and Tommy McClennan. He recorded eight sides for OKeh in 1941 with Washboard Sam and upon being discharged from the Army in 1949 he recorded several sides for Regal. Frank spent the next few decades playing on street corners, juke joints and restaurants before hitting the festival circuit during the folk revival of the 1960's. In 1972, Edwards recorded the album “Done Some Travelin'" produced by Pete Lowry for the Trix label. When not onstage, the iconic “Mr. Frank" was a familiar face at the clubs, supporting other blues musicians in Atlanta. In 2002, Edwards recorded a CD of new songs and set favorites, Chicken Raid, for the Music Maker label.

Frank Edwards left home at 14 and played guitar and harmonica alongside Tampa Red. As World War II approached, Edwards joined seminal Mississippi bluesman Tommy McClennan and head...ed North, recording eight sides for OKeh in 1941 with Washboard Sam. After being discharged from the Army he cut two songs for Regal in 1949 and continued playing street corners, juke joints and restaurants, before hitting the festival circuit during the folk revival. Thanks to Pete Lowry, Edwards released his first full album “Done Some Travelin'" in 1972 through Trix. When not onstage, the iconic Edwards, or “Mr. Frank" as he was commonly known, was a familiar face at the clubs, supporting other blues musicians in Atlanta. He joined the roster of Music Maker artists in the 1990's, performing festivals once again before quietly passing away on his return home from a recording session in North Carolina for the Music Maker label on March 22, 2002.