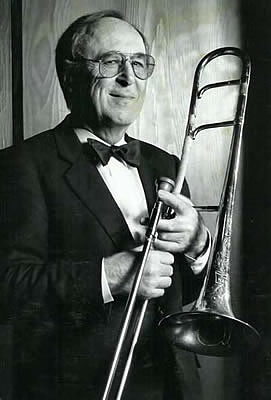 slideshow
The Shaw Theatre, London - Monday 19th & Tuesday 20th May 2008 'Musical legend' is an accolade too easily given to artists these days - but trombonist Chris Barber is one of the few to whom it truly applies. Currently enjoying his 59th year as a band leader, he formed his first Barber New Orleans Band in 1949 at the age of 19 and since then, has performed more than 10,000 shows and made thousands of recordings.

He has influenced many of the UK's most successful musicians, including Mark Knopfler, The Rolling Stones, Eric Clapton and Van Morrison, and indeed, gave many of them their first gigs as a co-founder of London's famous Marquee Club in 1958. The story goes that the first time an English audience ever saw an electric guitar on stage was when Muddy Waters guested with Chris at the Marquee! Three years later, Barber was one of the prime movers behind the establishment of the National Jazz & Blues Festival, better known today as the Reading Rock Festival.

Chris Barber's Jazz Band has been one of Europe's most successful traditional jazz bands since it was established in 1954. Over the years, it has expanded first into the Chris Barber Jazz and Blues Band and then, at the end of 2001, into The Big Chris Barber Band, with a complement of 11 musicians (three reeds, two trumpets, two trombones and the four-man rhythm section of bass, drums, banjo/guitar and electric guitar). Still touring relentlessly with as much enthusiasm and enjoyment as ever, a guest appearance on BBC2's 'Later... with Jools Holland' last February proved that Barber's music is as relevant today as it ever was.

Now, The Big Chris Barber Band returns to London to perform two shows at The Shaw Theatre on Monday 19th and Tuesday 20th May as part of its current UK tour.

The set will encompass a wide selection of Barber's favourite music, from his roots in New Orleans style ('Bourbon Street Parade', 'Chimes Blues'), through early Duke Ellington ('Black & Tan Fantasy' and 'Jubilee Stomp'), Sidney Bechet ('Petite Fleur') and Bob Crossby ('Big Noise from Winnetka', 'South Rampant St Parade') to the blues of Sonny Terry & Brownie McGhee ('Cornbreak, Peas and Black Molasses') soul (Joe Zawinul's 'Mercy Mercy Mercy' and the soulful blues of Miles Davis ('All Blues') - and will probably then return in a neat circle to 'When The Saints'! Whether you're a jazz and blues aficionado or just a casual listener, there'll be music here to excite, enthral, engage and entertain you, so don't miss out on the chance to catch a living legend in action!