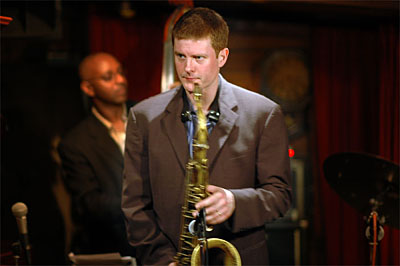 slideshow
If you're among those in the Erie area who feel they've heard some good music this summer, well, wait until you hear what's yet to come.

JazzErie has put together a highly promising 2008-09 concert season (its fifth annual) featuring some of the best jazz musicians in the world, as well as outstanding local and regional players.

Most of the musicians who will be part of the upcoming season -- leaders and their band members -- place among the top vote-getters year in and out in both the critics and readers annual polls in Down Beat magazine, the oldest and most influential publication covering jazz around the world.

Leading off (this is baseball season) is the exciting tenor saxophonist Eric Alexander, aka “Alexander the Great," the title of one of his two dozen albums as a leader. Alexander, recently named artist of the year by the JazzWeek.com, will lead a quartet in the season opening concert on Sept. 6.

Since placing second in 1991 to Joshua Redman in the Thelonious Monk Institute's saxophone competition, Alexander -- equally impressive on hard swinging numbers and romantic ballads -- has played on some 100 albums featuring some of the biggest names in jazz. His band -- all highly regarded players -- will include pianist Mike LeDonne, bassist John Webber, and drummer Joe Farnsworth.

On Nov. 21, David Liebman -- one of the masters of soprano saxophone and also a terrific tenor saxist -- will bring his quartet to town.

A multiple Grammy Award nominee who has played with a who's who in jazz (Miles Davis, Elvin Jones, Chick Corea, John McLaughlin, McCoy Tyner), Liebman is one of the most adventurous and prolific musicians in all of jazz. His discography fills pages.